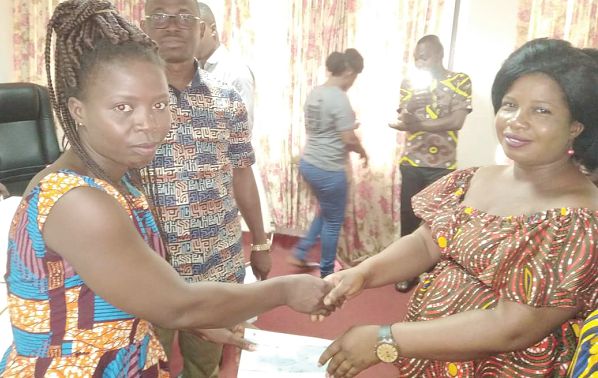 Ms Judith Klutey (right), member of the community presenting a cheque to Mansa Tettevi from the Adaklu Constituency Follow @Graphicgh

The Volta and Oti Regional Director of MASLOC, Mr Daniel Kafui , has assured the people in the two regions that the government has no intention to deny them of the Micro And Small Loans Centre (MASLOC) scheme, but rather it was a matter of time

made the remarks when he presented four cheques for GH¢ 100,000.00 to four MASLOC groups in the Volta Region in Ho. The groups were from the Ho Central, Ho West, Adaklu and Agortime-Ziorpe constituencies.

Each constituency is made up of 10 groups with each entitled to a GH¢25,000  group loan.

Mr Wudome said MASLOC, which started in 2006 during President John Agyekum Kufuor’s era, was a social intervention to support the poor and vulnerable, mostly farmers, fishermen and petty traders to enhance economic activities.

He said the President was committed to giving out 50 per cent of the MASLOC loans to women, not forgetting the youth who were in such as piggery, livestock among others.

He said cashew was a new crop that was being cultivated on a large scale now and MASLOC was committed to supporting the youth who were ready to go into cashew farming.

He said the President Nana Addo Dankwa Akufo–Addo-led government would ensure that the national cake was shared equally for the benefit of every Ghanaian citizen devoid of discrimination on either partisan or tribal lines.

The Volta and Oti regional director of MASLOC denied rumours making the rounds in the two regions that the present government was denying the regions of the MASLOC support.

“MASLOC has been restructured and invigorated with officers in all the 26 districts in the regions and the President is committed to putting resources into MASLOC to cater for all the recognised groups, and every group in each constituency will be served,” Mr Wudome said.

He, however, cautioned that the MASLOC was a revolving fund and each group that got it must pay back for it to go round. He gave an assurance that similar payments would be made to the other constituencies in the two regions.

The Credit Officer of MASLOC in the Volta Region, Mr Samuel Mawusi, also assured the beneficiaries of his office’s readiness to ensure that all the beneficiaries had the best of advice and would be able to pay on time for the fund to revolve for others to also assess it.

The Chairman of the Adaklu Constituency of the New Patriotic Party (NPP), Mr Raybon-Evans Anyadi, who chaired the function urged people in the Volta and Oti regions to exercise patience for the government to deliver.

He confessed that when the MASLOC loan was not forthcoming, every group was blaming the regional director, but he kept assuring the people that their turn would come and true to his words it had been paid.

A member of one of the groups in the Adaklu Constituency, Madam Adjovi , on behalf of other groups thanked the government for finally giving them the MASLOC loan.

She gave an assurance that they were going to work with it and pay back on time.