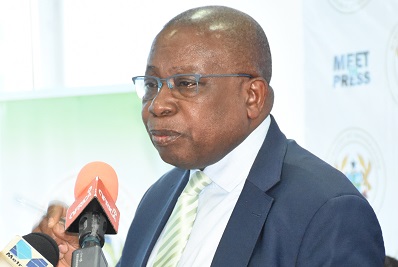 The Ghana Integrity Initiative (GII), a civil society organization has added its voice to calls for the Minister of Health, Mr Kwaku Agyeman-Manu to be sacked.

The group says President Akufo-Addo should dismiss the minister for his role in the procurement of the botched Sputnik V vaccine.

According to GII, Mr Agyeman-Manu’s acceptance of breaching parliamentary procedures in procuring the vaccines should be enough to hold him accountable in line with tenets of the constitution.

The Minister has come under intense pressure after it emerged in the report of Parliament's ad-hoc committee probing the botched Sputnik V vaccine deal that US$2,850,000 had already been advanced to Sheikh Al Maktoum despite public pronouncements by the Minister that no money had been paid by the government.

The Minority in parliament has since called for the dismissal of the Minister for various infractions in the deal, including his purported lie under oath that no money had been paid.

The minority further alleged that it had earlier been included in the report that the Minister lied to the committee, but they later realized that that portion was not in the final report. Majority Leader, Osei Kyei Mensah-Bonsu, refuted the claims that Mr Agyeman–Manu lied to the ad-hoc committee.

Speaking on Accra based Citi FM Wednesday evening, the Programmes Manager of GII, Mrs Mary Addah said there is no justification for the actions of the minister hence the call for him to be dismissed.

“Any public officer who accepts his faults, who agrees to be a public officer knows the magnitude and the demands of the office and cannot justify any wrongdoing whatsoever by confusion of the time”, she stated.

She added that wrongdoers must be brought to book irrespective of who they are, saying “We need to ensure that process is followed, due diligence is enhanced in this country…. And so those who do wrong should be called to order”.

Meanwhile, Mr Agyeman-Manu, has taken two-week leave to rest. The minister, who is also the Member of Parliament (MP) for Dormaa Central in the Bono Region, had made the request to go on leave to the Presidency some weeks ago to ensure that the two-week leave coincided with Parliament going on recess.

A source at the Ministry of Health who disclosed this to the Daily Graphic said the minister would also use the opportunity to be in touch with his constituents and his family, whom he had not seen for a while.

The leave was granted by the Chief of Staff, Mrs Akosua Frema Osei-Opare.