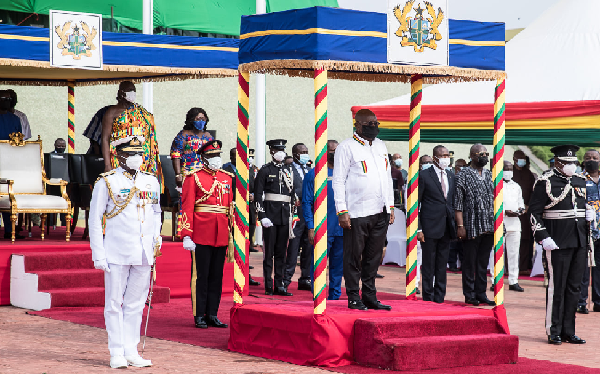 The novel event was as a result of restrictions on public gatherings due to the coronavirus disease (COVID-19) pandemic.

The unique parade and the other activities will go down in history as the shortest Independence Day ceremony and the only events held across the country to mark the day, which was in the past marked with week-long activities, climaxing with parades in all metropolises, municipalities and districts.

At last Saturday’s ceremony, only eight military officers and 29 men were on parade, and it lasted an hour.

The abridged 64th Independence Day parade, which was not publicised, had a few personalities on the Presidential dais, while special guests, including members of the Diplomatic Corps, numbering less than 70, were seated on both sides of the dais.

The national celebration, which was usually held at the Black Star Square, and in recent times in the Ashanti Regional capital, Kumasi, and the Northern Regional capital, Tamale, usually attracted hundreds of officers from the security services, schoolchildren, organisations, market women and traders and identifiable groups who marched past for hours.

This year, the euphoria that characterises the celebration in all districts was absent.

The frontage of the anchor building at the Jubilee House, which houses the President’s Office, was swathed with a large national flag with the colours Red, Gold and Green and the Black Star in the middle.

The abridged, unique and novel ceremony was characterised by restrictions on movement as part of measures to curb the spread of the COVID-19.

The officers and men on parade put together a silent drill, a brief splendid rifle drill in which, at one command, the contingent used their rifles to display in both quick and slow marches.

Drills and flying past

Right after the eight-minute drill was a national salute, amidst a 21-gun salute, which was followed by a Ghana Air Force helicopter towing the national flag flying past the Jubilee House.

Just before the arrival of the President, Nana Addo Dankwa Akufo-Addo, who addressed the gathering, the Vice-President, Dr Mahamudu Bawumia, who stood on a dais and took an abridged national salute, had arrived at the venue.

The President was dressed in an all-white attire, with hints of the national colours on the sleeves, the neck and both breast pockets.

He took the national salute and was ushered to his seat.

After prayers, the President was led by the Parade Commander, Colonel Richard Kayi Mensah, to light the perpetual flame, which symbolises the togetherness of the Ghanaian people.

The President, shepherded by his aides de camp, performed the task in the company of the Chief of Staff, Mrs Frema Osei-Opare, just before the drill display by the contingent on parade.

After President Akufo-Addo had delivered his address, the Parade Commander asked permission to march off the troops.

The parade played the National Salute for the President to depart, after which the Vice-President retired, and the master of ceremonies, Flt Lt Elizabeth Fadiga Salifu, brought proceedings to an end.