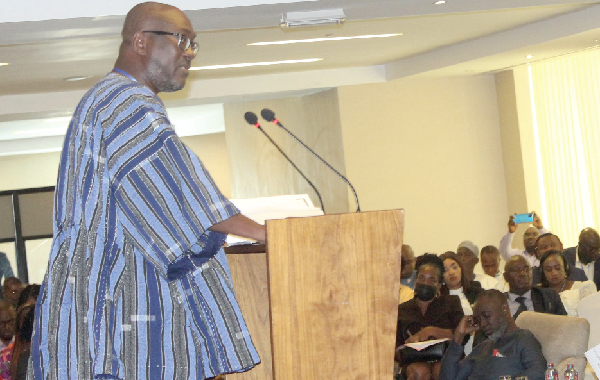 The Centre for Democratic Development (CDD-Ghana) has launched a trans-national democracy solidarity network to mobilise, coordinate and leverage the collective power of civil society and other pro-democracy actors to defend and advance inclusive democracy in the West African region.

Named the West Africa Democracy Solidarity Network (WADEMOS), it is in response to signs of democratic backsliding and a reversion to autocracy in the region.

The network was launched in Accra last Thursday on the theme "Countering Threats to Democracy in West Africa".

It seeks to, among other things, build solidarity, mobilise and facilitate collective action among West Africa's diverse pro-democracy civil society organisations and other civic actors.

It will also produce and disseminate data and analyses to support evidence-driven pro-democracy advocacy and activism in the region.

The Executive Director of CDD-Ghana, Prof. H. Kwasi Prempeh, who also doubles as the Project Director for the WADEMOS, noted that democratic backsliding in West Africa represents a major setback for the region and was a source of grave concern for its peoples. Already, he said, the region was faced with severe security and national cohesion challenges from the activities of jihadists and other violent extremists, notably in Mali, Niger, Burkina Faso and Nigeria.

He indicated that continuing democratic decline, with the risk of democratic breakdown in a few more countries, would spell disaster for the region.

Prof. Prempeh said stemming the democratic backsliding and reviving the region's leadership in advancing democratic norms would require determined and sustained effort and commitment, not only by national and regional authorities, but importantly by civil society actors.

He, therefore, indicated that the network would engage the Economic Community of West African States (ECOWAS) to address emerging and current challenges and threats to democracy in the region.

For his part, the Deputy Minister of Foreign Affairs and Regional Integration, Thomas Mbomba, said the launch of the network was timely and appropriate in the light of recent developments in West Africa, which involved the breach of constitutional rule in some countries within the region.

He said Ghana, as an active member of ECOWAS and a member of the United Nations Security Council, was committed to the principles of democracy, peace and security, rule of law and economic development.

Those shared values, he said, were prerequisites for equitable and inclusive development.

With such an initiative, Mr Mbomba expressed optimism that the members had capacity and the resources to mobilise, coordinate and leverage on the collective power of pro-democracy actors including engagements with organisations within the region in the hope and expectation that democracy could be defended, reinvigorated and enhanced.

He, therefore, commended the CDD-Ghana for taking the bold step in bringing the initiative into fruition.