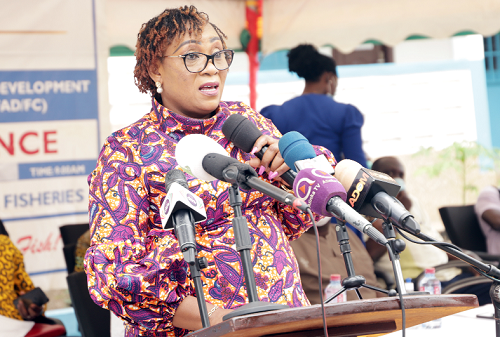 The Youth Wing of the opposition National Democratic Congress (NDC) has criticised the police administration for the manner in which it conducted investigations into an alleged shooting incident by the New Patriotic Member of Parliament for Awutu Senya East, Mrs Mavis Hawa Koomson.

The said shooting incident occurred in the Awutu Senya East Constituency during the voter registration exercise in July, last year.

Last Tuesday, the MP who is also the Minister of Fisheries and Aquaculture, told Asempa FM, an Accra-based radio station, that the police had discontinued investigations into the incident due to lack of evidence.

The Youth Wing of the NDC is not satisfied with the said discontinuance of the investigation, and have described it as a sad day for the country.

A statement issued by the National Youth Organiser of the NDC, Mr George Opare Addo, said the youth wing of the NDC was ‘appalled and scandalised” by the action of the police.

“The NDC is appalled and scandalised by this brazen abuse of state power. It is more worrying when the minister confessed that after she was invited by the Central Regional CID in July 2020 for questioning, and a supposed docket on the case was forwarded to CID Headquarters in Accra, she never heard of the Police CID until it became clear to her that the Police had no evidence to prosecute her,” the statement said.

During her vetting in Parliament in February this year, Mrs Koomson rendered an unqualified apology to the whole country for what she described as an unfortunate incident.

“The shooting incident which occurred during the voter registration exercise was unfortunate. I apologise to the people who were scared on that day.

“I pray it never happens again in our politics. It was in self-defence because I felt my life was in danger,” she told the Appointment Committee of Parliament.

The NDC Youth wing said it was disappointed in the acting Inspector General, Mr George Akuffo Dampare, over the incident.

“Unfortunately, however, the acting IGP’s first achievement was to kowtow to the dictates of the appointing authority to free Hawa Koomson who had openly confessed to firing gunshots in a public place without lawful authority.”

The statement said irrespective of the outcome, the NDC would prosecute all persons found culpable of the shooting incident when it returned to power.

“The NDC Youth Wing calls on all Ghanaians to brace themselves for reality that the State cannot guarantee their safety. We therefore charge Ghanaians to fiercely protect and defend themselves.

“We also want to assure all Ghanaians that crime has no expiration date, and come 2025 when the new NDC takes over the governance of our beloved country all those committing crimes against innocent Ghanaians will be properly investigated and everyone found culpable will be prosecuted,” the statement added.