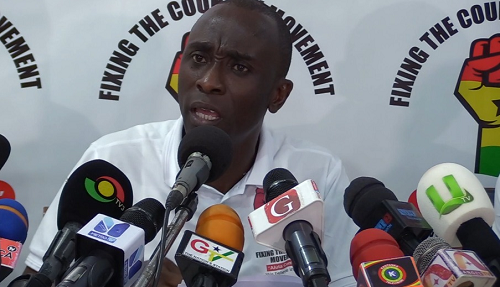 Members of the pro-New Patriotic Party (NPP) group, ‘Fixing The Country Movement’, say despite the challenges confronting all global economies, Ghana is working under the leadership of President Akufo-Addo.

The group said due to the impact of COVID-19 and the ongoing Russia-Ukrainian war which have affected all economies of the world, it will only take smart leadership such as that of President Akufo-Addo to implement policies that will help in the recovery of the country's economy so as to help cushion its citizenry.

Addressing a press conference in Accra on Sunday, April 10, 2022, the Founder and convener of the group, Mr Ernest Owusu Bempah said although members of ‘Fixing The Country Movement’ acknowledge the fact that there are some challenges confronting the country's economy, government deserved to be commended for how it has managed the economy amidst all the global economic challenges.

He said, for instance, that “In the UK, there’s a rising inflation, energy bills going up by 50%, mortgages going up with today’s Bank of England rate hike, Council Tax going up, National health levy going up as a result of the pandemic.”

Mr Owusu Bempah said the prudent management of Ghana's economy under President Akufo-Addo has helped to avert economic disaster, saying “As it is, smart governments the world over are finding solace in home grown tax policies in order to avert economic disaster. Ghana is no exception and the Akufo-Addo administration has been doing a lot to rally Ghanaians around the flag irrespective of our political differences and help build a better society.”

For him, it is therefore surprising that the opposition National Democratic Congress (NDC) will hide behind propaganda to discredit the country's economic performance, considering the global economic difficulties.

According to him, the recent lecture by the Vice President Dr Mahamudu Bawumia on Ghana’s economy was a clear testament of facts and figures that Ghana’s economy under President Akufo-Addo had performed better than that of former President John Dramani Mahama whose term did not witness any global economic crisis.

Mr Owusu Bempah said days after Dr Bawumia’s lecture on Ghana's economy, the NDC “is yet to formulate a convincing response or provide data to counter" what Dr Bawumia presented but instead, NDC’s leading activists, political figures have resorted to misleading propaganda.

“These NDC elements have sharpened their attacks against Dr Bawumia. And in doing so, they are ‘talking down’ our economic recovery even as the entire world crumbles under the post-pandemic political-economic realities,” he noted.

For him, it appears the opposition NDC is bereft of economic ideas such that they have to deploy inexperienced propagandists to respond to an otherwise serious economic issues presented by the Vice President Dr Bawumia.

For Mr Owusu Bempah, Akufo-Addo-led government has made significant achievements which have increased investor confidence in the Ghana’s economy, saying “in the year 2021, Ghana came second in attracting Foreign Direct Investment (FDI) in Africa and added that “As a nation, we bagged US$2.7 billion worth of investment out of which US$2.6 billion was from FDI.”

He said Ghana is currently the fastest growing mobile money market in Africa and has 36.9 million registered mobile money accounts.