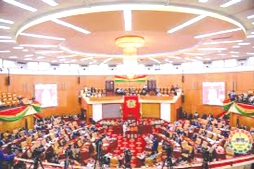 When the Ghana Centre for Democratic Development (CDD-Ghana) released its round nine Round of the Afrobarometer survey on July 26, 2022, it provided important signals about the current state of Ghana’s democracy.

I have often argued that Ghana has made its peace with democracy. My argument has been strengthened through the survey’s findings that almost 8 out of 10 citizens say, “democracy is preferable to any other form of government.”

To further demonstrate citizens’ preference for democratic governance, the survey’s findings show that there was a strong rejection of authoritarian rule with almost nine out of 10 Ghanaians saying they disapproved of one-party and one-man rule.

It is the combination of these factors that reassures me that we have indeed made our peace with democracy.

While I am happy about our continued strong support for democracy and our positive dispositions towards democratic norms, there are two major stress points that I believe require sober reflection and serious work.

The first is the deterioration of the democracy balance sheet. Democracy consists of a demand side and a supply side.

What makes this year’s especially significant is that the deficit is the highest it has ever been in the history of the Afrobarometer survey with satisfaction lagging behind support at a staggering 26 percentage points.

The second stress point has to do with citizens’ perception of our institutions. Institutions form a key part to making democracies work. There are two extremely important indicators to be measured with regard to how our institutions are viewed —trust and perceptions of corruption.

Meanwhile, concerning perceived corruption among institutions, the top five considered most/all are involved in corruption were as follows: Police 65 per cent; Presidency 55 per cent; Members of Parliament 54 per cent; Judges and magistrates 46 per cent; and Tax Officials 46 per cent. What is particularly worrying is the fact that, in the history of the Afrobarometer survey, there was a time (Round 2, 2002) in which only 11 per cent perceived the presidency to be corrupt and 21 per cent perceived members of parliament to be corrupt. The combined picture of low trust and high perceptions of corruption among institutions presents a challenge to our march towards democratic consolidation.

With all these findings notwithstanding, I reiterate my point that we have made our peace with democracy. However, more work is required to maintain this peace that our democracy has enjoyed so far.

Our democracy balance sheet would benefit from a boost in the supply side in order to meet the demand from citizens while our institutions must strive to improve their perception among the citizenry with regard to trust and ensure that they combat corruption to improve citizens’ confidence in them.

At a time when we continue to strongly support democracy and have positive dispositions towards democratic norms, it is not a point of pride for our democracy knowing that satisfaction with the way democracy is working is at its lowest.