Confusion in CPP: Central C’tee asks chairperson to step aside but elders say no 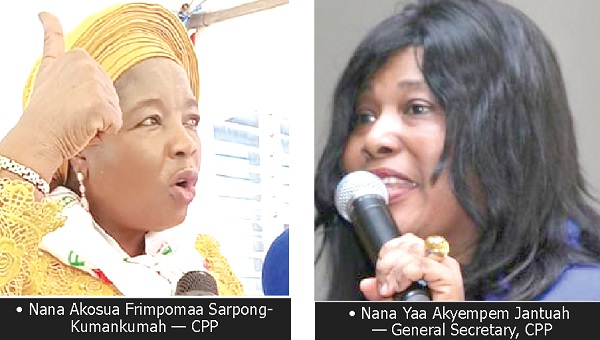 The turmoil in the Convention People’s Party (CPP) continues to deepen following a directive by the party’s Central Committee (CC) for its chairperson, Nana Akosua Frimpomaa Sarpong-Kumankumah, to step aside.

That, it said, was to enable the party to hold a rerun of the election between Nana Sarpong-Kumankumah and the first runner-up in the chairmanship race, Hajia Hamdatu Ibrahim, in its August 22, 2020 election.

But a counter-statement issued by the party’s Council of Elders, dissociated it from the meeting and described it as unlawful.

“The said meeting by our reckoning and the constitution of the party is unlawful,” it said in a statement signed by the council’s secretary, Islam Subiri Isah.

The statement said the Council of Elders, pursuant to the mandate granted under Article 68 of the CPP constitution, viewed with concern the recent events engaged in by certain members of the CPP

However, the General Secretary of the CPP, Nana Yaa Akyempem Jantuah, in a rebuttal of the council’s statement insisted that the said CC meeting was lawful and properly constituted.

Speaking to the Daily Graphic, she said there were 30 members present out of the stipulated 52 members including 10 regional chairpersons, five committee chairpersons, the seven elected leaders of the party and other regional representatives.

“One key point about the Central Committee is that the leadership of the party should be present and agree on the processes, and this was exactly what transpired at the April 21, 2022 meeting,” she said, stressing that “all that the CC is saying is that let us work with our constitution and in the present case Article 93 (e and f),” she said.

“Is the Council of Elders saying as elected leaders of the CPP, we should not uphold the constitution of the party?” she queried.

That error, it said, had been admitted and accepted by the Chairman of the Interim Organising Committee of the 2020 internal elections, Mr R. O. Frimpong Manso.

It explained that no vote was also taken at Congress to waive the constitutional provision requiring 50 per cent or more threshold and replaced it with a simple majority vote threshold.

The statement said the Central Committee found the numerous petitions and court actions against the party disruptive to the smooth running of the party.

That, it explained, was because the alleged meeting of April 1, 2022 was unconstitutional.

It said the committee also nullified all appointments or newly sworn-in members of the Central Committee by Nana Sarpong-Kumankumah on March 7 and April 1, this year, as not binding and of no legal effect.

The statement said the committee unanimously agreed to refer Nana Sarpong-Kumankumah to the disciplinary committee for alleged misappropriation of funds donated to the party in the run-up to Election 2020.

It said the committee also unanimously revoked the appointment of Sylvester Sarpong-Soprano as Director of Communications.

It said Mr Sarpong-Soprano had also been referred to the disciplinary committee for bringing the party’s name into disrepute by citing five national officers for contempt of court on an official party letterhead.

On its part, the Council of Elders condemned the CC’s attempts to remove Ms Sarpong-Kumankumah from office.

It said the April 21, 2022 meeting which allegedly attempted to reverse a decision taken by an earlier Central Committee meeting held on March 7, 2022, and April 1, 2022, respectively was unfortunate.

The council, therefore, called on the rank and file of the party to disregard the said meeting since it was unlawful and amounts to contempt.

“We know that the earlier Central Committee meetings of March 7, 2022, and April 1, 2022, respectively, in so far as it was to affirm the terms of settlement and implement the consent judgement was lawful and therefore any person who fights against it is acting contrary to the judgement of the High Court,” the statement said.

The statement called on all members of the CPP to channel their efforts and resources towards elections at the branch, constituency and regional levels to pave the way for the National Delegates Congress.