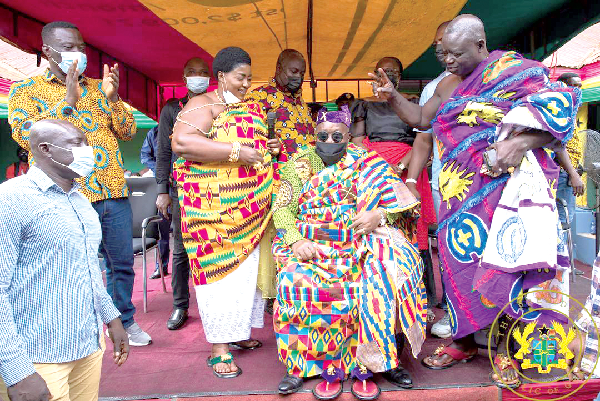 President Nana Addo Dankwa Akufo-Addo has earned a chieftaincy title for his dynamism and efficiency in managing the COVID-19 pandemic in the country, at the end of a two-day working visit to the Bono Region.

The chiefs and people of Chiraa in the Sunyani West Municipality honoured the President with a stool name ‘Okogyeaman’ ‘Odomankoma’ Nana Akufo-Addo, when he called on Barima Minta Afari, the chief of Chiraa, at his palace on Wednesday.

President Akufo-Addo who earlier addressed the chiefs and people with a call on Ghanaians to rally solidly behind his government to achieve his vision for the nation, expressed appreciation to the Chiraa people for that honour.

The President said though there were other political parties, it was only the New Patriotic Party (NPP) that could positively turn the fortunes of the country around, and entreated Ghanaians to retain the party in the 2024 elections.

As part of his visit, President Akufo-Addo inspected and inaugurated some projects in the region.

He assured the chiefs and people of Chiraa that his government would ensure that some basic educational needs of the Chiraa Senior High School (SHS) would be provided to improve on teaching and learning.

Barima Afari, also the ‘Benkumhene’ of the Dormaa Traditional Area, stressed that the President deserved the honour for measures he put in place in fighting the COVID-19 and making life better for citizens amidst the spread of disease.

He also lauded the government's implementation of the Free Senior High School programme, which he added had increased enrolment at the SHS, saying student population had jumped from 192 to 2,155.

Established in 1982, the Chief said the school was in dire need of an administration block and school bus, and appealed to the President to support them with those two facilities.

Barima Afari again appealed to the President to assist to expand the Chiraa Health Centre which was constructed in 1971 to cater for only 33,000 people at that time.

He explained the government's social intervention programmes such as the Planting for Food and Jobs and the One-district-One-factory were beneficial to citizens and therefore pleaded with President Akufo-Addo for the establishment of a factory in the area.

Barima Afari condemned unscrupulous activities of illegal miners, illegal loggers and tax defaulters, saying national reconstruction remained a shared and collective responsibility of all and not the government alone.