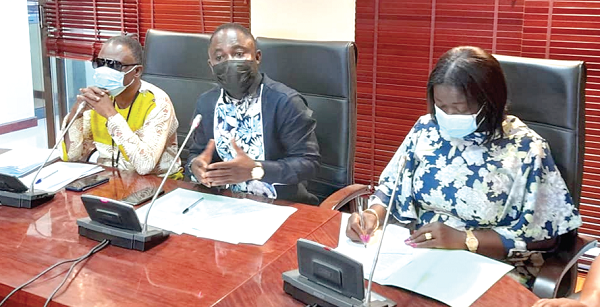 Mr Akandoh (middle) addressing the press. With him are Mrs Elizabeth Ofosu-Agyare, MP for Techiman North, and Alhaji A. B. A. Fuseini, MP for Sagnarigu
30.5k Shares

The Minority in Parliament has urged the government to place a temporary ban on flights from COVID-19 hotspot countries until the high record of cases of infection in those areas reduce.

It said as stated by the American Centre for Disease Control and Prevention (CDC), antigen tests were effective when patient viral loads were high.

That, the Minority group said, implied the antigen tests used at the Kotoka International Airport had the propensity to yield some false negatives, reducing its reliability as an effective screen against the pandemic.

“Due to this, some jurisdictions use real-time reverse transcription polymerase chain reaction (RT-PCR) tests in order to detect patients with early exposures to COVID-19 to improve on the speed of testing.

Addressing a press conference in Parliament yesterday, the Ranking Member on the Select Committee on Health in Parliament, Mr Kwabena Mintah Akandoh, said Ghana might therefore have imported cases of the virus which were not detected via the antigen tests at the airport, putting the entire nation at risk.

“This risk could have been avoided if government right from the onset had instituted an antigen policy like most other countries to determine when antigen tests are sufficient screens and when to either add on PCR tests or perform PCR tests alone to elucidate the positivity or otherwise of suspected COVID-19 patients.

“The Minority, therefore, demands that as a matter of urgency, the government should formulate and submit copies to Parliament of an antigen policy and implement it within the next few days,” he said.

Mr Ankandoh, who is also the Member of Parliament for Juaboso, also said there was no protocol with regard to ship crews arriving at the country’s sea ports.

"There are no recommended antigen or PCR tests for those individuals, and considering the fact that COVID spreads in confined spaces, and some of these crew members may have stayed for weeks in close quarters with others who may be infected.

He said with the rising cases of COVID-19 in the country, there was an urgent need for the government to expedite action on the procurement and deployment of vaccines across the country as earlier promised.

He said on January 31 during the update on COVID-19, President Nana Addo Dankwa Akuffo-Addo assured Ghanaians that preparations were ongoing to procure 17.6 million doses of COVID-19 vaccines for Ghanaians by June this year.

Subsequent to that, he said this year’s budget estimates made an allocation of $420m for the procurement of 42 million jabs of COVID-19 vaccines targeted at vaccinating 20 million Ghanaians by the end of the year.

According to him, Ghanaians were informed that the first dose of COVID-19 vaccines would provide a high level of protection for about eight weeks by which time another consignment would have arrived to ensure the administration of a second jab for persons who had already received the first jab.

It was expected that the vaccines would have arrived before April 28 this year so that those who had taken their first jabs could take their second jabs and those who had not been vaccinated would get the opportunity to be vaccinated, he said.

“However, today is the May 2 and as we speak no additional dose of AstraZeneca vaccines have arrived, putting Ghanaians who had already received the first jab at the risk of losing the partial immunity they acquired through vaccination.

“This has the potential to make some desperate Ghanaians procure from unauthorised sources sub-standard jabs of COVID vaccines in order to extend the protection they have after taking their first jabs.

“We find it rather unfortunate that after provisions were made in this year’s budget for the procurement of vaccines and the assurance of President Akufo-Addo, not a single vaccine has been procured by the government for Ghanaians,” he said.