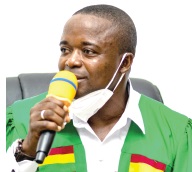 Mr Adjei, who had already served two terms as presiding member, was the only one who picked the nomination form at the close of nominations.

He secured all the 31 votes representing 100 per cent of total votes.

In his acceptance speech, Mr Adjei said the AMA under his leadership would strive not only to create new ideas but would also lay a new foundation for growth and development.

“We will do our business in the light of day, because only then can we restore the vital trust between the technocrats and the assembly members,” he added.

He urged members of the assembly to embody the spirit of service and the willingness to find meaning in something greater than themselves.

The Chief Executive of the Accra Metropolitan Assembly, Elizabeth Naa Kwatsoe Sackey, appealed to the members of the assembly to set aside their differences and rally behind the elected presiding member.

“It is therefore necessary that as soon as the election is over, we will quickly bury our differences and rally behind the victor for the betterment of AMA whose collective interest is higher and above our individual well-being” the mayor said.

In a solidarity message, the Member of Parliament for the Ablekuma South Constituency and a former Metropolitan Chief Executive of Accra, Alfred Oko Vanderpuije, assured the assembly of his continuous support for the AMA in carrying out its mandate.

He charged Mr Adjei to work in a manner that reflected the confidence imposed on him by members of the assembly.