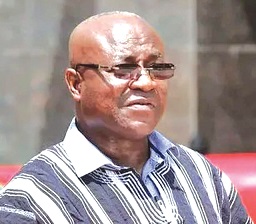 The Majority Leader, Osei Kyei-Mensah-Bonsu, has called for an amendment of article 195 of the Constitution to guarantee the independence of the Auditor-General (A-G) to bolster the fight against corruption.

He said the office of the A-G was a public one and a tool for Parliament for fighting corruption, but article 195 vested the appointment of the A-G in the President, a provision that deprived the A-G of independence.

“Fortunately for us, article 195 is not an entrenched provision; so, if we want, we can bring it to Parliament and amend the Constitution to effect this change to really guarantee the independence of the A-G,” Mr Kyei-Mensah-Bonsu, who is also the Member of Parliament (MP) for Suame, stated.

Speaking on the floor of Parliament last Wednesday, Mr Kyei-Mensah-Bonsu said “Parliament must pursue the financial autonomy of the A-G in order to insulate the position and get its occupant to be really independent.”

He made the comment in contribution to a statement presented by the National Democratic Congress (NDC) MP for Ho West, Emmanuel Bedzrah, to commemorate “African Anti-Corruption Day”.

The day, which fell on July 11 has been set aside to reflect on the impact of corruption on Africa’s development, analyse strategies put in place by nations to deal with the menace, and mobilise public support towards the fight against it.

Mr Kyei-Mensah-Bonsu said corruption was an abuse of public trust and stealing of public funds for private gain, and called for conscious efforts to nib the canker in the bud.

For him, MPs must be concerned about corruption, since it hurts the poor more than the rich in society, as national resources that otherwise could be serving public good were diverted for private gain.

The Suame MP cited the report by the Centre for Democratic Development Ghana (CDD) which indicated that an equivalent of $3 billion was lost each year due to corruption.

“This was justified by the World Bank that close to 20 per cent of public allocations were lost to corruption, which translated to about $3 billion every year.

“This should compel us as a House to use the tools of our committee to be doing much serious inquisitorial job than we have been doing,” Mr Kyei-Mensah-Bonsu said.

The Majority Leader explained that the principal function of Parliament in the fight against corruption was the use of various committees to exercise oversight responsibility over the executive, including the various ministries, departments and agencies (MDAs).

Mr Kyei-Mensah-Bonsu, therefore, expressed worry over the failure on the part of Parliament to keep referring to the Auditor-General’s report as key to the fight against corruption, saying the “A-G only supplements what Parliament is required to do.”

“It is a deficit in our performance as a Parliament, since we are the gatekeepers of the public purse, allocate resources for public goods and services and the executive executes the programmes and projects with those resources,” he added.

“Once the resources are allocated and the appropriation bill is passed by this House and assented to by the President, it is the responsibility of parliamentary committees to go after the various MDAs in the application of these resources,” the Suame MP explained.

Earlier, the Deputy Minority Leader, Dr James Klutse Avedzi, said the 1992 Constitution had made provision for the Office of the A-G to be responsible for the audit of public accounts.

He, therefore, urged the House to amend the Constitution to ensure that the A-G was appointed by a process to ensure their independence to improve the fight against corruption.

Mr Bedzrah, in his presentation, said in spite of an unwavering national commitment to fighting corruption and ensuring transparency and accountability in governance, the practice continued to be a good enterprise for some Ghanaians.

He, therefore, proposed that section 124 of the Criminal Offences Act, 1960 (Act 29) be amended to make corruption a first-degree felony, instead of its present form as second-degree felony.

He also proposed that persons found culpable in the A-G’s report be dealt with according to the law.

The assets declaration procedure should also be amended for public disclosure of assets by government appointees, parliamentarians and persons considered to be of political risks, including all public servants in key positions.