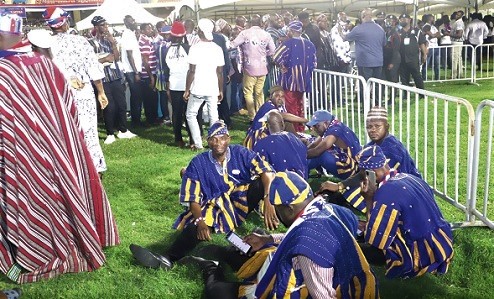 The Accra Sports Stadium last weekend became a sea of the red, blue and white colours of the governing New Patriotic Party (NPP), as more than 6,700 delegates congregated to elect the party’s new national officers.

Party paraphernalia and artefacts — including the elephant symbol of the party — adorned every part of the stadium and the streets of Osu, while party faithful made fashion statements in bright colours that blended with the NPP’s identity.

The three-day National Delegates Conference commenced last Friday, with voting coming off on Saturday, and climaxed on Sunday when the Electoral Commission (EC) declared the winners.

The conference was part of the party’s internal elections that had already led to the election of officers at the polling station, constituency and regional levels.

It was also a prelude to the election of a flag bearer to lead the party into the 2024 elections. That election, which will be held nationwide, is expected to come on next year.

The conference, dubbed: “Holding Hands, Working Together”, but informally christened by delegates as the “Breaking the 8” conference — a mantra of the NPP’s determination to break the cycle of eight-year party reign — had all the aura and characteristics of a major political party event.

There was the human traffic that bogged all parts of the conference venue as delegates, news teams, traders and dignitaries were screened by the security agencies as part of the protocols, while traders of snacks, party souvenirs, and even packed food took advantage to full effect.

Some party sympathisers had pitched camps on the precincts of the stadium as early as 7 a.m. long before delegates started arriving at around 11 a.m. to cast their votes.

Amid the funfair characterised by loud music sounds, some supporters were in full campaign mood, distributing flyers of their favourite candidates, trying to convince delegates to vote for them.

The carnival atmosphere outside the stadium and the serious business of national executive elections inside it was a fine blend of hot and cool feeling that might have lowered the blood pressure of many.

Inside the stadium, there was rapturous response from vuvuzela-blowing delegates when party leaders addressed them, and their candidates introduced.

Candidates who received the biggest cheers from the delegates included Stephen Ntim, who ended up being elected as the National Chairman, and Justin Frimpong Kodua, who also won the General Secretary position.

There were hints of subtle marketing on the conference platform by bigwigs rumoured to be planning to contest the party’s flagbearership, as groups of ladies, youth and ‘friends’ advertised their support for some lead candidates.

Minister of Trade and Industry, Alan Kyeremanteng, was ushered into the conference grounds by brass band, with his followers singing and dancing after his vehicle, while many groups scattered around the stadium wore T-shirts that touted the name of Vice-President Mahamudu Bawumia and sang about him.

Amid the heightened interest in the proceedings, security inside and outside the stadium remained tight.

With the programme attracting VIPs such as President Nana Addo Dankwa Akufo-Addo, the Vice-President, Dr Bawumia, ministers and Members of Parliament, the security agencies, led by the police, appeared to hold firm control over their duties.

Their detail included ensuring that only those with the appropriate accreditation entered the stadium, with security generally tight at every point.

Although there were some isolated incidents, the entire conference, including the voting and counting of the ballots, were conducted in a peaceful and orderly manner.

Supervised by the Electoral Commission, the delegates voted by constituencies or in groupings if they were Members of Parliaments (MPs), Ministers of State, metropolitan, municipal or district chief executives, members of the National Council or National Executive members.

In a departure from its last National Delegates Conference in Koforidua which dragged on for hours, the NPP, this time around, provided about 25 polling stations which expedited the voting process.

The only delay happened during the counting which was held up by a challenge against the results declared in the vice-chairmanship positions, leading to the re-collation of the results for three times.

Some of the delegates, who spoke to the Daily Graphic, expressed satisfaction with the conduct of the conference, describing it as one of the best in the party’s history.

“We have shown that we can take care of our business. The party put a lot of work and effort into this conference, and it turned out very well,” a delegate from the Volta Region, who gave his name as Edem, said.

Another delegate, Agnes Boakye, from the Ashanti Region, said although the contest was keen, the unity exhibited by the candidates after the elections was a testament that the NPP was united to win the 2024 general election.