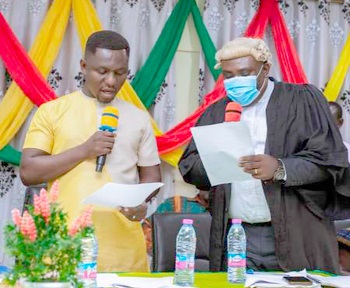 Mr Aiden polled 31 out of the 33 valid votes cast to defeat his challenger, Alfred Nyarko Baiden, the assembly member for Tabita/Badukrom, who obtained two votes.

The assembly could not elect a presiding member during the first assembly meeting at Akyem Manso on March 31, 2022 as neither of the two contestants secured the 22 votes (being two-thirds) of the 33 valid votes cast.

The election ended in a stalemate as Mr Aiden had 17 votes, with Mr Baiden obtaining 16 votes.

In his acceptance speech, Mr Aiden expressed his gratitude to God and the MP for the area, George Aboagye; the District Chief Executive (DCE), Alex Incoom, and the assembly members for the endorsement.

He enjoined his colleague assembly members to work tirelessly to transform the district.

He urged the government to give the assembly a new vehicle to facilitate internal revenue mobilisation.

The MP, Mr Aboagye, called on the assembly members to bury their political differences and work in unity to push the district forward.

The DCE, Mr Incoom, expressed his gratitude to the entire assembly members for electing a presiding member to facilitate the progress of the assembly.

In a related development, Kofoya Tetteh reports from Kwabeng that the Atiwa West District Assembly in the Eastern Region has retained its Presiding Member, Douglas Amponsah Padi, for the position.

At an election held at Kwabeng, Mr Padi, who represents Ekorso Electoral Area, polled all the 25 votes (representing 100 per cent of the votes cast).

Mr Padi, a social worker with a non-governmental organisation (NGO), gave an assurance that he would continue to co-operate with the assembly members, staff as well as the District Chief Executive (DCE), Seth Asante, in all undertakings.

That, he indicated, would ensure a rapid socio-economic development for the people in the communities.

He expressed appreciation to the assembly members for the confidence reposed in him.

Mr Padi was later sworn into office by the Kwabeng Magistrate, Love Elemons.

She advised the assembly members to focus on the education and vocational training of children in the area.

She also appealed to parents of pregnant schoolgirls to allow such girls to continue with their education after giving birth.

The DCE, Seth Asante, for his part assured Mr Padi of his continued support for the development of the communities.