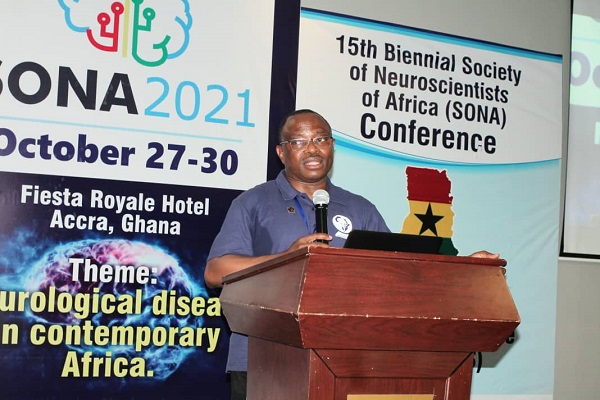 The Nigerian High Commissioner to Ghana, Mr Gambo Yusuf Hamza, has urged academics on the continent to deepen collaboration in the area of neuroscience and its impact on behaviour.

This, he said will help provide scientific evidence that can inform policy that will cater for the needs of people with special cognitive needs.

He was speaking at the 15th Neuroscientists of Africa (SONA) Conference which was held in Accra.

The conference which is held every two years brought together over 100 neuroscientists from across the world.

Hosted by the Ghana Neuroscience Society, the conference which took place both in-person and virtually was on the theme, “Neurological diseases in contemporary Africa”.

The four-day conference, brought together researchers to share advances in their field of work.

Notable among these include: investigations into the effect of radiofrequency exposure, evidence supporting the use of specific herbal extracts to treat epilepsy and work being done to translate research findings form English into other indigenous languages.

The President of the Society, Dr Patrick Amoateng explained that bringing the international neuroscience community to the country was very important as it would create opportunities for networking and community building.

“It also gave our students to share their work on a platform that they would otherwise not be exposed to,” he said.

The President of the International Brain Research Organisation (IBRO), Prof. Tracy Bale, pledged her outfit’s support to finance research and capacity building initiatives in the country and across Africa.

“There’s such quality research being done on the continent that the rest of the world needs to hear about,” she added.

For her part, a Senior Researcher in Brain Behaviour, Dr. Lihle Qulu, said there was the need for countries to consider therapy for rapists instead of jailing them.

Dr Qulu, who is also a senior researcher at the Stellenbosch University in South Africa said the suggestion was based on her research findings which showed that convicted rapists had experienced some form of early life trauma or abuse which had the potential to influence brain function and behaviour as they mature.