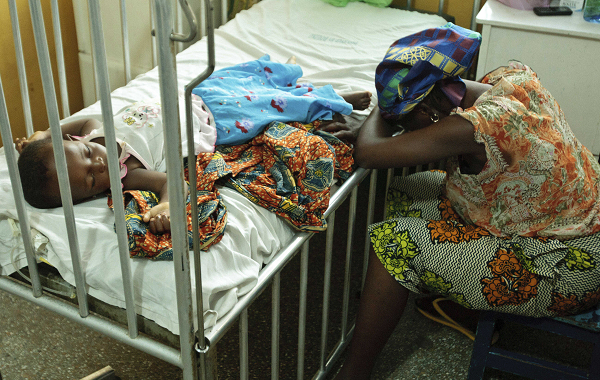 Ghana, my beloved motherland, is not only troubled by the deadly COVID-19 pandemic, the country is also equally concerned about how to eliminate one of its silent but major killer diseases—malaria.

Unlike COVID-19 which is new to us, malaria has been tormenting us for several decades, if not centuries, sending many people to their early graves. Like a hunter bereft of mercy for any animal that he chances upon, malaria spares no life. It affects and kills people of all ages and gender.

Malaria remains a major public health problem in Ghana and by extension, Sub-Saharan Africa, where according to data by the World Health Organisation (WHO), is home to 90 per cent of malaria cases and 92 per cent of global malaria deaths recorded in 2015.

In a study titled: "Estimating the risk of declining funding for malaria in Ghana: the case for continued investment in the malaria response" which was published on June 10, 2020, via www.malariajournal.biomedcentral.com, it was estimated that it will cost Ghana $961 million between 2020 and 2029 to eliminate malaria.

Even though many malaria control interventions have been rolled out in Ghana in the last two decades, malaria still remains one of Ghana’s main causes of mortality and morbidity.

Although malaria kills without recourse to one’s age and gender, the disease is quite fatal in children and pregnant women, particularly children under-five years.

Statistics by the Ghana Health Service (GHS) in 2016 revealed that Ghana recorded a total of 590 malaria deaths among children under five years. The figure, however, dropped to 327 in 2017— showing an improvement in the country’s effort in the fight against the disease.

And of the 10 highest malaria burdened countries in Africa, Ghana and Nigeria reported the highest absolute increases in cases of malaria in 2018 compared with 2017.

Preventing malaria-related deaths and cases are not out of Ghana’s reach. We can achieve this however, if only we are committed to the fight. For instance, over the last five years, Ghana has seen a steady decrease in malaria deaths in children under five, and more of this can be achieved.

At an Editors’ forum in Accra in September 2020, the Deputy Programmes Manager of the National Malaria Control Programme (NMCP), Mr James Frimpong said Ghana has recorded a reduction in malaria deaths in children under five by 83 per cent over the last eight years.

For Frimpong, Ghana’s new five-year strategic plan, spanning 2021-2025, had been developed with an intention to reduce in all malaria-related deaths by 90 per cent by 2023 as well as to reduce malaria incidence by half by 2025.

Zero Malaria Starts with Me

The targets to reduce all malaria-related deaths by 90 per cent by 2023 as well as to reduce malaria incidence by half by 2025, are laudable and must be prioritised in our national activities. This also requires that we change our attitude towards the disease, especially how to prevent it in the first place. This is why everyone must play a part in the “Zero Malaria Starts with Me” campaign.

The “Zero Malaria Starts with Me” campaign was launched across Africa in 2018 with the aim of achieving zero cases of malaria-related deaths in Africa, particularly in the malaria endemic countries on the continent, including Ghana. Ghana belongs to the 11 highest malaria burdened countries in the world.

Adopted by 55 heads of state and African governments, 16 African countries have since launched the campaign (Zero Malaria Start with Me) on a national scale, igniting grassroots movements that seek to engage individuals, families, communities, religious leaders, business leaders, political leaders and other members of society to take ownership of the fight to end malaria, hence creating a world free from malaria.

The “Zero Malaria Start with Me” campaign’s objectives include mobilising the financial resources required to end malaria and driving momentum among communities though education and igniting ownership of malaria control interventions.

Achieving the targets of the “Zero Malaria Starts with Me” campaign will require that we as a people and as a nation give the campaign the needed support.

Sadly, many of these interventions do not receive the necessary support from the very people for whom these interventions were introduced. Many health experts have expressed the worry that many parents who own the LLINs do not sleep in them, with some going as far as using the treated nets to fence their backyard gardens.

For instance, a Ghana News Agency’s report of September 26, 2020, titled: “Media Coalition for malaria control and elimination launched” quoted Dr Anthony Adofo Ofosu, the Deputy Director-General of the Ghana Health Service (GHS) of having said that despite the country’s achievement of over 70 per cent of the Insecticide Treated Net (ITN) coverage, only 50 per cent of people who owned these nets slept in them, leading to widespread exposure to mosquitoes.

Parents must sleep in the nets with their families. And also, people should refrain from the practice of self-medication. This is because the practice whereby people do not go for any malaria test but go to the pharmacies and chemical shops to buy malaria drugs based on adverts they might have seen or heard in the media is not only dangerous to their health but could potentially lead to death.

More importantly, expectant mothers must take the full course of the malaria drugs given them during pregnancy. This will help them to protect themselves and their unborn babies against malaria infections. This is because malaria in pregnancy, if not detected early and treated, could lead to death.

As the popular adage goes, a stitch in time saves nine. We all need to do our part to ensure a malaria-free Ghana, for we cannot afford to lose our loved ones to the paws of malaria. Zero Malaria indeed Starts with YOU!