Malaria; the known foe of ‘Kayayei’ 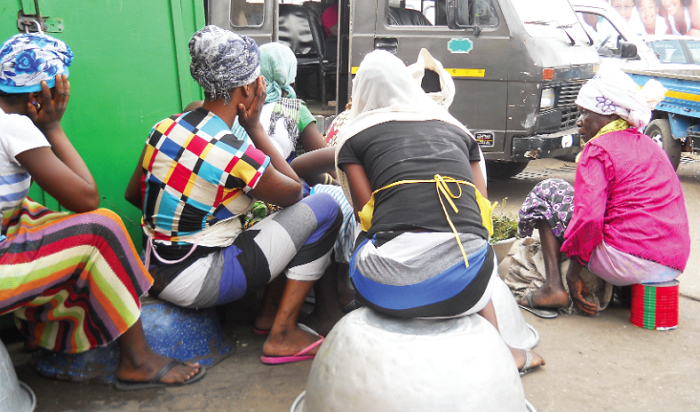 Mother of two Halima Abdulai, 34, came to Accra in 2015. Her decision to travel to Accra was based on the advice of her friend, Jemilatu Ibrahim, who had herself been in Accra since 2011. For Halima, circumstances necessitated she relocated from Savelugu in Ghana’s Northern Region to the national capital, Accra.

While in Accra she would be engaged as a head porter (Kayayoo) to earn a living. Losing her husband to a motor accident in Tamale only ten months after her second child, life was no longer bearable for her and her two children. Now a single mother and unemployed, survival instinct kicked, sending her first from Tamale to Savelugu to perch with her mother and her husband, a welder.

So when Jemilatu, who in Halima’s estimation was doing well in Accra invited her to come join the trade, she did not hesitate—it was an opportune call even if she did not have enough to pay her fare to Accra.

Her motherly love troubled her too. Who would take care of her children, especially the younger one? Her first child, a girl, was almost three years old then, and the second, a boy, was one-and-half years. She discussed her plans to travel to Accra to be a head porter with her mother. Halima’s mother was not too happy with her daughter’s decision, but she offered to take care of Halima’s first child.

According to Halima, aside from her fear of who was to take care of her children, she was also scared about the Kayayoo job since she had heard a lot about the many challenges Kayayei (head porters) go through in Accra, particularly with accommodation. Her good friend, Jemilatu, had assured her though that she would share her kiosk accommodation with her.

She finally decided to make the journey to Accra around May. That was in 2015. It was her first time visiting the capital, and she dreamed big. Jemilatu also sent her friend GH¢100 via mobile money to pay her fare. And when Halima finally got to Accra at the STC station, Jemilatu and a few of her Kayayei friends were already there waiting.

Jemilatu took her to her kiosk accommodation at Old Fadama, a slum community at Agbogbloshie in central Accra. Halima was happy that finally, her life was going to change for the better. But Jemilatu was not in the kiosk alone, she shared it with three other ladies, and Halima would be the fifth occupant. Halima was not worried at all about the kiosk being shared with other people; after all, they are all in Accra to better their lives for themselves—they are all hustlers.

On her first day at work, Jemilatu showed her around the ins and outs of the Agbogbloshie market. And on the subsequent days, she took Halima to other places she plied her trade. For Halima, although the Kayayoo job was tedious, it was better than doing nothing. On her first day at work, she made more than GH¢100 and for Halima, who was finding it difficult to come by GH¢20 back in Savelugu, it was a life changing beginning.

The band of lady hustlers did not anticipate the coming misfortune. Indeed they could not have. City authorities planned to eject squatters in the area for a proposed project, and the kiosk accommodation which provided a place for them to lay their heads, was part of illegal structures standing in the way. Sadly for her, the kiosk and hundreds other resting places were demolished just one-and-half months after she arrived in Accra. With no kiosk to sleep in, Jemilatu and Halima together with her other friends, decided to make the pavements at the COCOBOD head office their beds after the day’s work. It was during this time that Halima’s child started to fall sick.

For Halima, she initially started giving her son some drugs she bought at the chemist. She saw no improvement in her son’s condition, it was rather worsening by the day so she took him to the Korle-Bu Poly Clinic where she was diagnosed of malaria. For her, her son would have died if she had not taken him to the hospital.

Halima said after her child was treated and discharged, she sent him home to her mother since it was not safe for him to be with her on the pavements due to the mosquito bites.

She realised, rather to her chagrin, that malaria was the commonest health hazard for many of the Kayayei and their babies, living in the open of these mosquito infested environments.

Some of us sleep at the market places and at many open places and so mosquitoes bite us all the time, she said, adding that our children are our major concern. Because they are babies, they are always sick.

For Halima, too many of the kayayei’s babies are at the mercy of mosquitoes. She thinks if only the government would step in to build accommodation for Kayayei to afford them decent accommodation in Accra and other major cities, it would be a major health booster.

Halima’s story underlines the high incidence of malaria among the Kayayei community. And Halima’s case is but one of the many cases of Kayayei and their children catching malaria because they are so exposed sleeping in the open unprotected.

Kayayei or Kaya Yei’ are part of the mobile vulnerable groups who are at an increasing risk of being infected with malaria. This is because the Kayayei people move around the city to carry out their duties and many of them do not have any accommodation. And because they do not have any place to lay their heads after work, they mostly sleep wherever they find themselves in the evening. Sadly, many of these Kayayei do not use the insecticide treated nets (ITNs) when sleeping.

And with the continuous over supply of female head porters in Accra and other major cities in the country, it is obvious many of these young women and their babies are at a high risk of contracting malaria due to the places they sleep.

It is sad to mention that many of these Kayayei end up sleeping on rags, cardboards or on the bare ground at the market centres, pedestrian walkways, lorry parks, and on pavements among other unsafe places, where they ply their trade.

In Accra, for instance, many of them can be found at places such as the Konkomba Market, Timber Market, Odorkor, Sodom and Gomorrah, Agbogbloshie Market, Mallam Attah Market, Graphic Road, behind the Accra Technical University, Madina Market, Baatsona Market and Odawna Market.

In November 2017, the then Minister of Gender, Children and Social Protection, Madam Otiko Afisah Djabah said there were over 150,000 female head porters in the country.

Considering the increasing number of these Kayayei in major cities in the country and their vulnerability to malaria, particularly their babies, it is important that this group is factored into the country’s malaria control and prevention strategy and programmes. This is because many of these Kayayei do not benefit from most of the malaria intervention programmes such as the use of long-lasting insecticide nets.

Factoring the Kayayei into the national malaria programmes will also help the country in its fight towards achieving zero malaria cases in Ghana. This is because Ghana is still part of the 11 high burden malaria countries in the world, accounting for four per cent of the global cases and seven per cent of all malaria cases in West Africa.

Statistics by the Ghana Health Service (GHS) also indicates that Ghana in 2016 recorded a total of 590 malaria deaths among children under five years. These deaths are unacceptable although the under-five deaths reduced to 327 in 2017. We cannot afford to continue to lose people, particularly babies to malaria in Ghana. And many of these babies of Kayayei are at higher risks of getting malaria due to where their mothers sleep.

In an interview, the Executive Director of RISE-Ghana, a Bolgatanga-based Non-Governmental Organisation (NGO) with focus on health and governance, Mr Awal Ahmed Kariama, he called for an intensified education on malaria among the Kayayei population.

For him, there is the need to “educate them to understand the causal factors” so that they can protect themselves against the disease, noting that the best way to protect one’s self against malaria is for one to live in a clean environment.

He admonished Kayayei to see malaria as an economic issue since when one gets malaria, it makes them unproductive and incapacitated to go about their daily business.
Mr Kariama also called for a behavioural change among the Kayayei community since many of them disregard preventive protocols such as sleeping under the long lasting insecticide-treated nets (LLINs).

Speaking on the issue, Ms Muniratu Venu, a Social and Behaviour Change Officer with the National Malaria Control Programme (NMCP) of the Ghana Health Service (GHS), said the NMCP as part of its efforts to help prevent the incidence of malaria among Kayayei, has rolled out a number of intervention programmes, including free distribution of the long insecticide nets and the training of peer educators on malaria.

The peer educators, she explained, have been trained on malaria preventive measures as well as on case management practices to enable them also educate their colleague workers on malaria.

She said so far, 56 peer educators and 24 liaison officers have been trained across eight market centres in the country.

Ms Venu said in each market, seven peer educators (Kayayei) and three liaison officers (leaders of the various markets) were trained on malaria through demonstrations and role play activities.

She said, for instance, that in Accra, the peer educators were trained at Mallam Atta market, Tema Station, Madina market and Darkoman market.

Ms Venu also pointed out that the NMCP is doing community sensitisation programmes on malaria “at where they (Kayayei) sleep and work on malaria.”

She said the NMCP office also collaborated with the National Health Insurance Authority (NHIA) to give some free health scheme cards to some of the Kayayei to enable them access healthcare services in the event that they contract malaria, adding that a number of the Kayayei benefited from the initiative.

She, however, expressed the worry that many of those who received the treated nets do not use them, explaining that a study her office conducted on malaria prevalence among the Kayayei revealed that a little over 50 per cent of the Kayayei do not use any malaria preventive measures.

Ms Venu has, therefore, encouraged beneficiaries of the treated nets to use them throughout the night, particularly the expectant mothers and nursing mothers.

For her, it was only through the use of effective malaria preventive measures such as the use of the treated nets that will help people to protect themselves and their families against malaria.