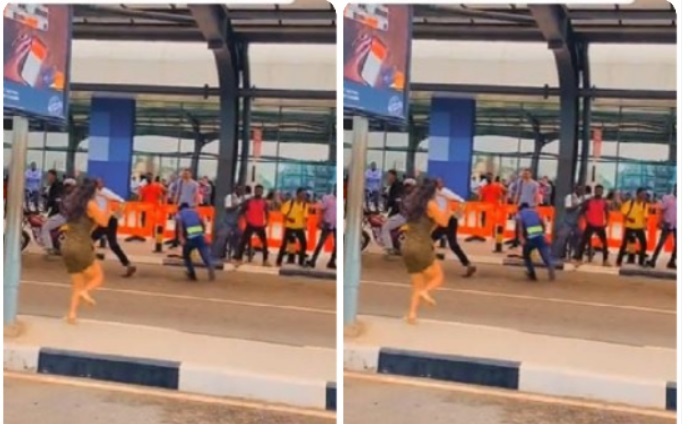 A woman was arrested on Wednesday, July 13, 2022, at the Kotoka International Airport (KIA) after injuring a car park attendant.

The woman described in a Ghana Airports Company Limited (GACL) statement as a "female foreigner" allegedly parked on the pedestrian crossing at the Terminal 3 departure frontage of the KIA.

She allegedly also refused to move her vehicle when she was directed by the car park attendant to do so, resulting in the vehicle being clamped.

The GACL in a statement said, "in a fit of rage, she got down from the vehicle, removed the clamp and threw it at the Car Park attendant, injuring him in the process".

The statement added that she was "subsequently arrested by Police Personnel deployed at the Airport and handed over to the Airport Police Station".

The incident was captured in a video posted on TikTok, which has since been widely circulated on other social media platforms.

The 26-second clip shows the light-skinned female pursuing a man in a reflector vest.

The woman returns to the tyre of a stationary blue vehicle to retrieve a metallic object which she throws at the fleeing man before she is approached by a police officer.

Attached below is the 26-seconds video of the incident