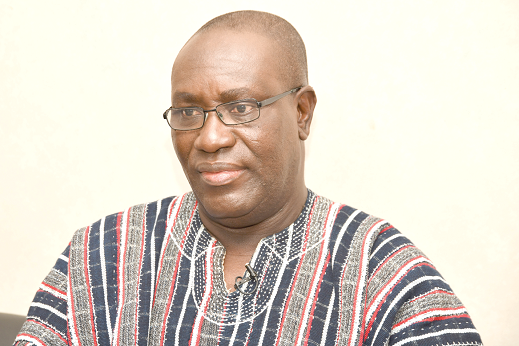 The Trades Union Congress (TUC) has called on the government to direct all economic recovery and transformation efforts in the next four years on job creation.

It has, therefore, called for effective collaboration among stakeholders, whom it describes as social partners, to create more and better jobs for young Ghanaians, both in the public and the private sectors of the economy.

In a New Year message signed by its Secretary-General, Dr Yaw Baah, the TUC said: “We can make a huge difference if we work together to remove the numerous constraints in the way of domestic production, including corruption, high interest rates, ultra-liberal trade policies and the deficit in our social and economic infrastructure.”

The TUC said it was counting on the new leadership of the country to deliver the people from mass poverty that had afflicted a significant section of them.

It said the introduction of more initiatives, such as the recruitment of additional teachers, security personnel and the implementation of the Nation Builders Corps (NABCO), as well as state-sponsored entrepreneurship development programmes, would help address the employment crisis facing the youth.

“As we have pointed out time and again, it is unpardonable that, almost 64 years after independence from colonial rule, millions of Ghanaians have no access to basic necessities such as clean water and sanitation facilities; 4.5 million Ghanaians have no access to electricity, despite the fact that Ghana has excess capacity of electricity; a significant number of Ghanaian children and women of child-bearing age are suffering from chronic malnutrition and anaemia; many children are dying needlessly from malaria and other preventable diseases because of unhygienic conditions and poor health care; our roads are comparable to war zones in terms of the number of people who lose their lives through preventable road accidents every day; many Ghanaians are living on the streets because they have no access to housing; our national daily minimum wage is a paltry GH¢319 per month and young graduates cannot find jobs many years after graduation,” it pointed out.

It said the task ahead was huge, a fact which President Nana Addo Dankwa Akufo-Addo acknowledged in his inaugural address when he said: “There is a considerable amount of work that is to be done over the next four years in our drive to take our nation firmly onto the path of progress, prosperity and development following the havoc wreaked by the COVID-19.”

It, therefore, called on the two major political parties, the New Patriotic Party (NPP) and National Democratic Congress (NDC), to find a way of working together, not only in the parochial interest of their parties but, more importantly, in the supreme interest of the good people of Ghana.

The TUC said if government initiatives, such as One-district, One-factory (1D1F) and Planting for Food and Jobs, were pursued more vigorously, they could strengthen the domestic private sector and make a significant difference in strengthening the industrial base of the economy for job creation, especially in rural communities.

Although the economic disruptions occasioned by the COVID-19 had delayed negotiations for an increase in the daily minimum wage and the base pay on the single spine salary structure (SSSS) for public sector workers for this year, the TUC indicated that it had written to the Ministry of Employment and Labour Relations requesting for a meeting of the National Tripartite  Committee to commence negotiations on a national minimum wage for 2021.

It expressed the hope that the negotiations would be concluded before the budget was presented to Parliament in March this year.

It reiterated its appeal to the government to ensure that no worker was worse off, no matter which year he or she retired, and stressed that the government must bear the full responsibility for any shortfall in pension benefits until the benefits under the Pensions Act (Act 766) and PNDCL 247 were equated.

Explaining further, it said it had petitioned President Akufo-Addo last year to approve a top-up of pension benefits for workers who retired in 2020 under Act 766 to ensure that they were not worse off, compared to the benefits they would have received if they had retired under PNDCL 247.

It said the government graciously granted its request and, therefore, it expected the top-up to be paid to the beneficiaries as soon as possible, saying: “We know that workers who will retire in 2021 and 2022 may also face the same challenge.”

The TUC, however, expressed regret at the government’s decision to exclude all security agencies from the unification of pensions and said the union could not support such a policy.

“It should be noted that pension unification is an important component of the pension reform. The decision to allow the security agencies to continue to enjoy benefits under the non-contributory CAP 30 scheme undermines the solidarity principle which served as a key guiding principle for the pension reform initiative.

“That decision also contravenes the principle of equality of treatment in employment, as clearly stipulated in the International Labour Organisation (ILO) Convention 111 (Discrimination–Employment and Occupation) which was ratified by Ghana in 1961.

It further called on the government to convene a stakeholder consultation forum to discuss all the pertinent pension matters and threatened to refer the matter to the ILO if the government went ahead to implement this “discriminatory policy”.

On the COVID -19 pandemic, the TUC urged union leaders to ensure that appropriate personal protective equipment (PPE) was provided for workers by employers at every workplace.

“Our heroes and heroines who are working in the health sector deserve our commendation. We urge the government to do whatever it takes to protect them from infection,” it said.