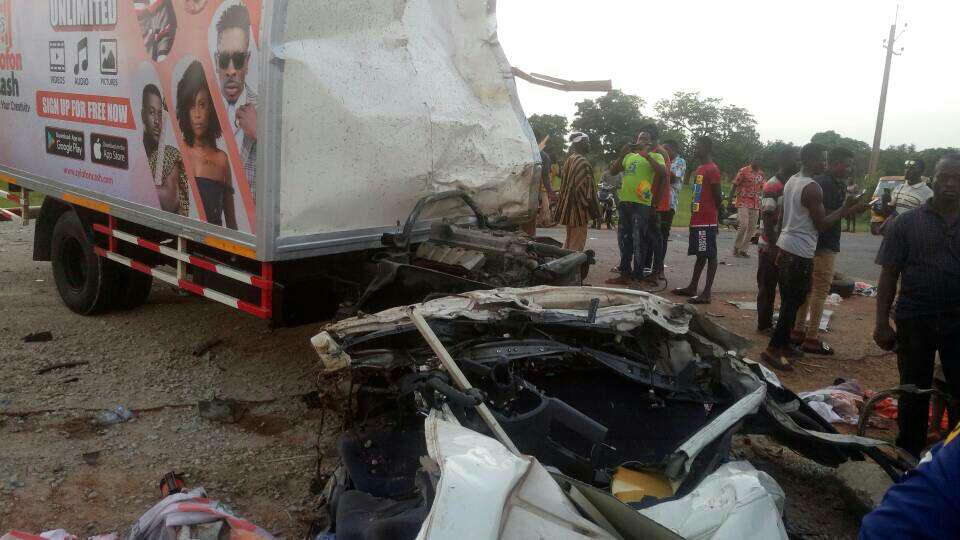 least nine persons are feared dead and several others injured after some fans of Fancy Gadam, a Tamale-based musician were  the accident.

The fans were on their way to the Tamale Airport to welcome Fancy Gadam and Patoranking, a Nigerian musician who billed for a musical concert in Tamale on June 30, reports Mohammed Fugu.

According to eyewitnesses, one of the vans, the fans boarded had a burst and the driver lost control and rammed into a moving long truck.

Several fans who were riding motorbikes and saloon cars in a convoy were said to have also crushed into the accident vehicles injuring a number of fans.

The deceased since been deposited at the Tamale Teaching Hospital (TTH) morgue for autopsy whiles the injured are receiving treatment at the same facility.

According to an eyewitness, the accident occurred when a vehicle conveying the fans, collided with another vehicle, which was said to have had a burst, causing the driver to veer off the road.

Fancy is one of the most celebrated musicians in the Northern Region of and has a huge fan base who constantly support his events.

When he picked up an award at this year’s Vodafone Ghana Music Awards, he was given a rousing welcome when he returned to Tamale.

According to Graphic Online’s reporter in Tamale Mohammed Fugu, in spite of the fatal accident, tens of Fancy Gadam fans on the principal streets of the Tamale Metropolis, jubilating and riding recklessly.

Fancy Gadam however in a Facebook post later on Friday announced that the concert has been called off.