Rise in consumption of chocolate, cocoa products in Month of ‘love’ 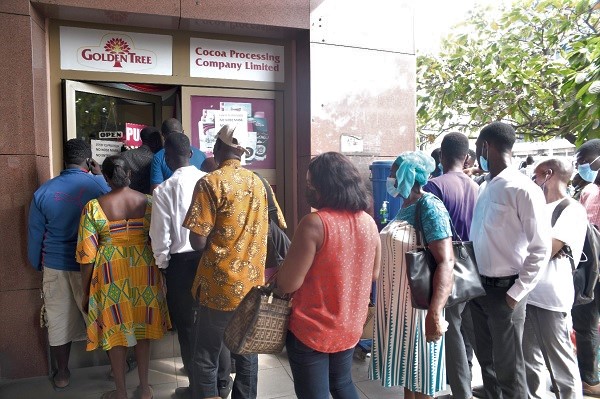 People in a long queue to buy chocolate at the Head Office of COCOBOD in Accra yesterday. Picture: Emmanuel Quaye Follow @Graphicgh

Demand for locally produced chocolate and other finished cocoa products has picked up significantly, as more people heed calls by the Ghana Cocoa Board (COCOBOD) and other stakeholders to consume more Ghana cocoa.

The Cocoa Processing Company (CPC) and other major cocoa processors are now struggling to meet the demand for the products, especially in this month of February when more people patronise chocolate and other products in a symbolic gesture to show love, as is associated with Valentine’s Day.

From the sale of 187 tonnes of chocolate and other finished cocoa products in February 2018, sales at the CPC have almost doubled to 300 tonnes this month as a result of a steady rise in demand over the period.

The marked increase in patronage also follows the revamping of the National Chocolate Day celebration to create awareness of the benefits of cocoa and the need to make its consumption a routine, instead of an event.

The Managing Director of the CPC, Nana Agyenim Boateng I, told the Daily Graphic over the weekend that his outfit was overwhelmed by the rise in demand, but said it had strategically repositioned its operations to take full advantage of the demand.

He attributed the growing demand to the awareness created by COCOBOD, the Ghana Tourism Authority (GTA) and other stakeholders of the need to consume more Ghana-made chocolate and cocoa due to its benefits.

The MD, who is the Chief of Amoaman in the Ashanti Region, added that apart from the month of February, Christmas and Easter were occasions people patronised CPC’s products.

He said as a result of the high demand, the company was now sourcing funds to retool and expand its confectionery factory.

The National Chocolate Day was instituted in 2005 to coincide with Valentine’s Day, which falls on 14th February, every year, to boost the domestic consumption of chocolate and other cocoa-based products to promote domestic tourism.

This year, week-long activities for the celebration began on February 8 and climaxed yesterday. It was on the theme: “Eat chocolate, stay healthy, grow Ghana”, with the sub-theme: “Our chocolate, our health, our earth”.

The GTA also organised a float along some principal streets of Accra, ending at the Chocolate City, temporarily set up at the Tetteh-Quarshie Interchange.

The float sensitised the public to the health and economic benefits of chocolate and other cocoa-based products.

Speaking at the end of the float, the acting Deputy Chief Executive Officer (CEO) of the GTA, Mr Ekow Sampson, gave an assurance that the authority would intensify its campaign to help increase the per capita consumption of cocoa from 0.5 to 1.5 kilogrammes by the close of this year.

“We intend to intensify the promotion of local consumption of chocolate and other cocoa based-products and also extend the campaign to the rural communities to make it more effective to ensure that we achieve our target.

“I am sure that if we sustain the momentum in the next couple of years, more people are going to consume chocolate to put us up the ranking, which is very low at the moment,” Mr Sampson said.

According to him, cocoa products were capable of improving blood circulation, reducing blood pressure and providing energy and vitality.