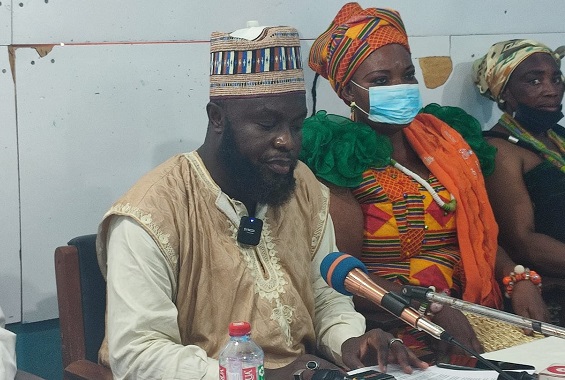 Concerned Imams and Chiefs, a group of Imams and Muslims Chiefs drawn from across the country have urged President Nana Addo Dankwa Akufo-Addo to reconstitute the current Hajj Board but retain Sheikh Ibrahim Cudjoe (I.C.) Quaye as Chairman.

According to the group, the Board which oversees the participation of Ghanaian Muslims in the annual Hajj Pilgrimage must be reconstituted to give a fair representation of the various stakeholders in order to prevent interest groups from sabotaging the operations of the Board.

They also want Sheikh I.C. Quaye retained because they insist he was so far delivered flawless and incident-free Hajj Pilgrimages to Ghanaian pilgrims since he was made Chairman.

Addressing a press briefing on Monday in Accra, a leading member of the group and Municipal Chief Imam of La, Sheikh Imam Abdul Rashid Odoi Atsem accused three members of the current Hajj Board of hatching a plot to remove Sheikh I.C. Quaye from office because he was a Ga.

"It is clear that the call for the removal of Sheikh I. C. Quaye is borne out of selfishness, hatred, tribalism and politics," Sheikh Atsem said.

"We, therefore, call on the appointing authority, His Excellency Nana Addo Dankwa Akufo Addo to reconstitute the current Hajj Board to give a fair representation of the various stakeholders in order not for one tribe or interest group to sabotage the operations of the Hajj Board because their preferred tribesman was not made the Chairman of the Board.

When asked by pressmen to disclose the identity of the individuals behind the alleged plot to sabotage the Hajj Board, Sheikh Atsem said his faith did not permit him to expose the culprits and bring them to public ridicule.

"Islam prefers that as much as possible, you should cover the nakedness and the fault of your brother or sister but as I spoke, If they listen to the press conference they will know I am addressing them and members of the Patriotic Muslim Front," he said.

Sheikh Atsem also responded to concerns raised by members of the  Patriotic Muslim Front last week during a demonstration in Accra.

He said their call for the removal of Sheikh I.C. Quaye had no basis but was borne out of selfishness, tribalism and politics.

"To begin with, is it not curious that if indeed members of the Patriotic Muslim Front have a problem with the increase in this year's Hajj fare, they will not call for the dissolution of the entire Board but call for the removal of only the Chairman, Sheikh I.C. Quaye?" he quizzed.

"Again, if indeed the upper age limit of 65 years is an automatic disqualification of Sheikh I.C. Quaye and a call for his removal from Office, what about the other members of the Board who are more than 65 years? In fact, Sheikh I. C. Quaye at 86 years led Ghana's delegation to the annual Hajj Conference in the Kingdom of Saudi Arabia as recently as May 2022. If he doesn't qualify to lead Ghanaian pilgrims for this year's Hajj, the Ministry of Hajj would have told him in the face".

"To our brothers and sisters of the Patriotic Muslim Front, we don't hate you because we are all Muslims. Eschew the subtle promotion of tribal interest, peddling of falsehood and character assassination. Next time, tell your demonstrators that we respect their right to free expression but as Muslims, they should desist from addressing their fellow Muslims as criminals when they have not conducted any investigations and convicted anyone".