Accra-based Radio Gold has started a test transmission with the hope to start full-time broadcasting in a month's time.

In a statement dated March 16, 2022, signed and issued by the Chief Executive Officer of the radio station, Mr James Agyenim-Boateng, who is a former Deputy Minister of Information, the test transmission will last for a month after which regular programming will begin.

Radio Gold was shut by the National Communications Authority (NCA) in 2017 after it failed to renew its operating license for the frequency 90.5 FM over a long period.

The action by the NCA affected 33 other broadcast stations who were all shut down after a 2017 audit embarked upon by the NCA.

Radio Gold had over a long period not paid to renew its operating license.

In 2021, the NCA approved the granting of a total of 133 FM radio broadcasting authorisations to some entities.

Radio Gold was among the entities whose new applications were approved and it was offered the same 90.5 megahertz on the Frequency modulation (FM).

Below is a copy of the statement issued by the management of Radio Gold on the test transmission: 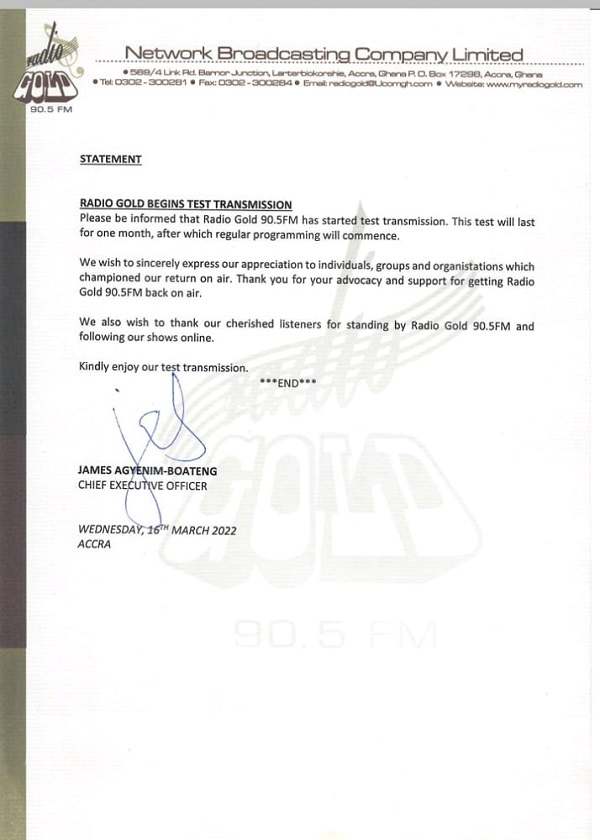