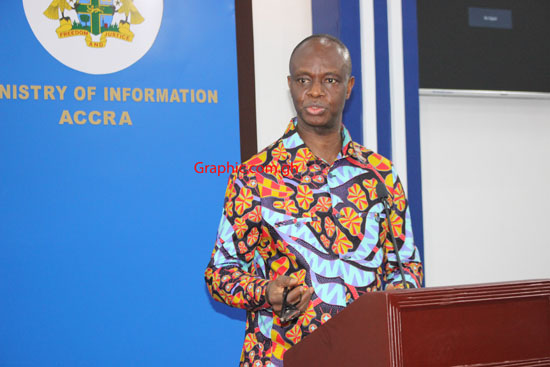 According to the NCA, the licence of Radio Gold expired in 2000, while that of Radio XYZ expired in 2016 but they failed to renew them, as required by law.

Officials of the regulator and policemen stormed the premises of the media entities about 2 p.m. yesterday to close them down.

At the time the stations were shut, they were said to be carrying live a press conference addressed by the Council of Elders of the National Democratic Congress (NDC) on the invitation extended to the party’s National Chairman, Mr Samuel Ofosu Ampofo, by the Criminal Investigation Department (CID) of the Ghana Police Service in connection with some security issues in the country.

At a press conference held in Accra after the closure of the stations, the NCA explained that the shutdown was part of a nationwide exercise to clamp down on spectrum holders who were operating illegally.

The Director-General of the NCA, Mr Joseph Anokye, who addressed the press, stressed that the exercise was not targeted at any specific radio station for any reasons.

He explained that the NCA was carrying out a nationwide exercise to enforce the ruling of the Electronic Communication Tribunal that directed it to shut down radio stations that were operating illegally.

He maintained that the shutdown was the result of an audit exercise conducted in 2017 in which the two stations and others were found to have operated without licences.

He added that the notion that Radio Gold and Radio XYZ were specifically targeted did not hold water, insisting that the closure of the two entities was part of a nationwide enforcement of a ruling by a court.

Mr Anokye said the two stations could reapply for fresh spectrums to operate if they so wished.
He added that the NCA would continue with the exercise in the other regions for the next one month.

When asked about the number of media organisations that would be affected in the exercise and if they were aware, he said: "We have, in one way or another, informed those stations that have been affected and we would not like to give any names here but we will surely enforce the law on all stations in this category."

He added that the stations that were fined and had paid their fines before the ruling of the court would have their money refunded to them.

In September 2017, the NCA sanctioned 131 FM authorisation holders found to have committed various infractions pertaining to their authorisations to operate, as contained in Section 13 of the Electronics Communications Act (2009), Act 775.

The FM Spectrum Audit also formed part of a wider and ongoing audit of all services regulated by the NCA, including TV and ISP services.
Section 13 of Act 775 states, among others, that “the authority may suspend or revoke a licence or a frequency authorisation where:

(a) the licence or the authorisation holder has failed to comply materially with any of the provisions of this act, regulations or the terms and conditions of its licence or frequency authorisation,

(b) the licensee or the authorisation holder has failed to comply materially with a lawful direction of the authority,

(c) the licensee or the authorisation holder is in default of payment of a fee or other money charged or imposed in furtherance of this act, the National Communications Authority Act, 2008 (Act 769) or regulations,

Below is a full copy of the NCA's explanation

Radio stations operating without valid authorisations as determined by the 2017 FM Broadcasting Audit are being shut down with immediate effect as enforcement action in view of the decision of the Electronic Communications Tribunal.

Following the FM Spectrum Audit in 2017, some stations were found to be in default and were fined by the Authority. However, some of the stations in default were not satisfied and proceeded to the various courts; Electronic Communications Tribunal (ECT) and the High Court to appeal against the NCA’s decision.

This resulted in a decision by the ECT in 2018 which reviewed the status of expired FM Radio Broadcasting Authorisations and which ruled among others that Companies whose authorisations had expired reverted to the same position as a fresh applicant. While some stations shut down following this decision, others did not.

It should be noted that, as ruled by the ECT, submission of renewal application after expiry of authorisation is not a valid application and therefore shall not be considered by the Authority.

While companies affected by this shut down may submit fresh applications to the Authority if they so wish, these applications shall go through the required procedure for new FM Broadcasting Authorisation and the outcome will be communicated to the applicants.

The general public is also informed that entities are only authorised to use frequencies for a specific duration or period. Frequencies are national assets and not the properties of users as they are not assigned to users in perpetuity.

The Authority takes this opportunity to encourage all licence and authorisation holders to ensure compliance with the various terms of their licences and authorisations, and as well the relevant regulations.