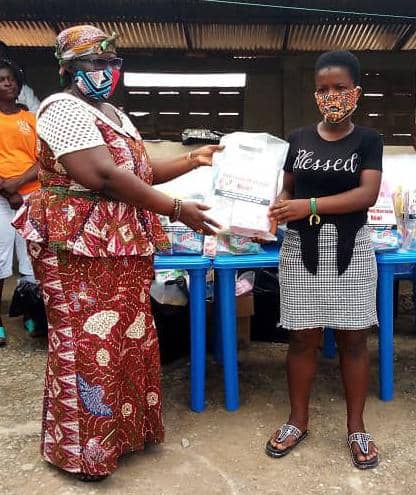 Nana Afua Badu at a ceremony to present sanitary pads to adolescents at Kissi
30.5k Shares

In Kissi in the Komenda Edina Equafo Abrem (KEEA) municipality of the Central Region, a queen mother is helping to build stronger and better family bonds.

This is translating into safer homes and reducing the many teenage pregnancies in the community.

“At first, I blamed adolescents for their wrong sexual decisions. Now I blame parents because many parents don’t relate well with their adolescents. They only shout instructions at them. It is rooted in our culture. Both parents and children are shy to discuss sex and sexuality in general and that is where we all get it wrong. So far it has been great. I love the impact I am making,” she stated.

Nana Badu cited an instance when a girl got pregnant and the mother sent her to stay with the boy’s mother.

“I ordered that the pregnant teenager be brought back home and had a conversation with the mother of the girl and the boyfriend’s mother on the need for the girl to return home. That same evening the girl was brought to her own mother. Months later the teenage mother was enrolled back in school.

“We get parents to talk to their adolescents to get them to open up. They talk about sexuality and this is preventing a lot of pregnancies,” the queen mother added.

In case any girl gets pregnant, Nana Badu says, the parents are encouraged to support the girl to go back to school or learn a trade.

“We have done a lot of education and this has had a lot of impact on the attitude and behaviour of parents in our community. Currently we have three girls in Junior High School who got pregnant but have re-enrolled to go back to school.

Recently, she said, the Ghana Health Service commended the leadership of the community for their efforts which they observed, had helped to reduce the incidence of teenage pregnancies in the community.

Nana Afua Badu II says her unwavering commitment to building a better community of enhanced family relationships is stronger now more than ever thanks to the Community Parents Network Advocacy Group (COPNAG).

COPNAG was established by the Department of Gender with support from and the United Nations Population Fund (UNFPA) and the Government of Canada to promote parental responsibility through community leadership by ensuring that parents were engaging their adolescents through enhanced communication.

At COPNAG meetings, parents are taught to understand the complexities of the adolescents' needs and how parents could provide them physical, psychological and emotional support for their total growth and development.

Victoria Jackson, a resident of Kissi is a beneficiary of Nana Badu's activities and corroborates Nana’s story.

When Victoria got pregnant at age 17 while in second year of Senior High School (SHS), she was devastated and so were her parents.

"My father was so angry he decided I should not continue my education.

That was when Nana came in. She is a very good mother and very kind. She spoke to me and encouraged me that it was possible to go back to school. She also talked to my father and assured him that God will make all things work for our good," she said.

With Nana Badu's counsel and support Victoria went back to join her mates and completed her SHS education, and successfully wrote her Senior High School Certificate Examination (SSCE).

She did well and is currently waiting to enter the Nurses Training College.

In fact, I owe a lot to Nana Badu. That woman is a very sympathetic and understanding. Nana, my queen, may you receive blessings and long life from God," she added.

Nana Badu indicated that though the impact of the COVID 19 was heavy on the activities of COPNAG in Kissi, the members did not relent.

With support from the UNFPA the leadership of COPNAG in Kissi took their education to the community information centre.

“On the community information system, we urge parents to support their wards and ensure they are protected from ‘preys’ who will want to take advantage of the innocent girls during the COVID period.

Nana said the support from UNFPA and the Canadian government has been worth it.

“The mistakes teenagers, especially teenage girls make must not be allowed to affect their future wellbeing. Now I speak to parents who have teenage mothers and teenage mothers to get them to go to school,” she added.

Turning into an advocate

However, Nana Badu’s efforts has not been without challenges.  In 2018, the queenmother made the news for her stern warning to teenagers who were got pregnant in her community.

She was reportedly quoted as having stated that any teenage girl who got pregnant in her community would be punished.

But later in December 2018 after participating in an advocacy programme for traditional rulers on Sexual and Gender-Based Violence (SGBV) and child marriage, Nana Badu received education on the causes of SGBV, teenage pregnancy among others and therefore started rethinking her approach to managing teenage pregnancy and adolescent mothers in her community.

She began educating adolescents on sex, urging them to adopt responsible sexual behaviours and further got involved in advocating against child marriages in her community.

Spurred on by the outcome of her efforts, the queen mother also supported the International Needs project, Promoting Adolescent Safe Spaces (PASS) also supported by UNFPA in her community.

So in 2019 when the Department of Gender in the Central region established COPNAG, it was not surprising that her community of Kissi was selected as a model community for the programme.

Her immense contribution to the success of COPNAG activities can not be underestimated, says Mrs Thywill Kpe former Central Regional Director for the Department of Gender.

According to her, Nana Badu has been instrumental in getting parents to act right with their adolescents and this she said had made a lot of difference.

"She is a traditional authority and her place of influence did a lot in getting members of COPNAG to accept the new concepts of parenting advocated.

She said Nana Badu is a role model and an asset to adolescent development adding "she is a catalyst linking parents, adolescents and the community," she said.

"I love her for what she stands for now. She is an inspiration to us all," she added.