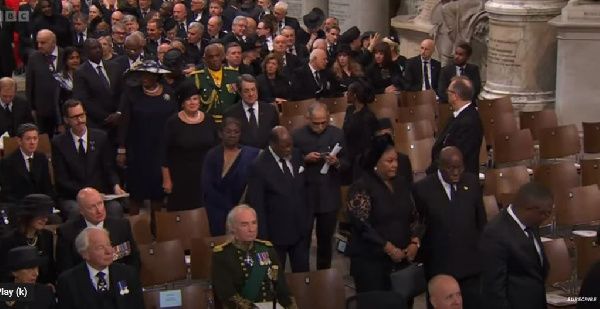 The President arrived in the UK capital last Sunday and paid tribute to the late British monarch, 96, as he signed the book of condolence opened in her honour at Lancaster House in London.

He said the queen had overseen the "dramatic transformation" of the Commonwealth into a global "force for good" during her 70-year reign.

“We appreciate it very much her relationship with the Commonwealth. We saw a dramatic transformation from a nation of eight countries when she went on the throne to 56 at the time of her death,” President Akufo-Addo said in a brief message to the people after signing the book of condolence.

He added that the Commonwealth, during the Queen’s reign, had become a very important institution in global affairs, comprising one-third of the world’s population and a definite force in the global arena.

The Queen until 1960 was the country’s head of state. In the colonial era, the period before March 6, 1957, her constitutional roles were delegated to the Governor-General who represented the Queen in the country.

In 1952, when Dr Kwame Nkrumah became Prime Minister, Queen Elizabeth II was still the head of state with the prime minister being the head of government.

However, in 1957 she granted a full independence to Ghana, leading to a new Constitution in 1960, under which Dr Nkrumah was elected first President under the republican constitution.

Some 2,000 mourners bid farewell to the Queen at the state funeral at Westminster Abbey, including 500 dignitaries, with Presidents, Prime Ministers and foreign Royalty among the guests.

US President Joe Biden, French President Emmanuel Macron and Canadian Prime Minister Justin Trudeau were among the world leaders at the funeral.

Members of many European Royal Families were present, along with the six surviving former British Prime Ministers.

It was the first state funeral since Sir Winston Churchill's in 1965 and the biggest ceremonial event since World War Two.

Tens of thousands of people lined the route taking the late Queen Elizabeth II to her final resting place at Windsor Castle, throwing flowers at the hearse and cheering as it departed the British capital after the state funeral.

Many thousands more crammed into central London to witness a ceremony of matchless pageantry, a fitting end for Britain's longest-serving monarch who won global respect during her 70 years on the throne.

The four-part state funeral was made up of the transfer of the Queen from the Westminster Hall, where she had laid in state for four days, to the Abbey for the state funeral, followed by the 1.7-mile march to the Wellington Arch, where the casket was transfered into the state hearse to begin another march, 20 miles to Windsor Castle, outside central London.

The state funeral began shortly before 11 a.m. (10 a.m. GMT) when the queen’s coffin was placed on a State Gun Carriage and pulled by 142 Royal Navy sailors, who formed part of the bearer party, to the Abbey, the finale of 10 days of national mourning for the British monarch who died on September 8, 2022 at Balmoral Castle, Aberdeenshire, Scotland.

The Queen's life-long sense of duty was remembered at her state funeral service as the Dean of Westminster, the Very Rev. David Hoyle, who led the service, expressed gratitude to the congregation of 2,000 people.

The Dean began the service by speaking of the Queen's "unswerving commitment to a high calling over so many years as Queen and Head of the Commonwealth".

"With admiration, we recall her life-long sense of duty and dedication to her people," he said.

The Archbishop of Canterbury, the Most Rev. Justin Welby, gave the sermon and quoted the singer Dame Vera Lynn: "We will meet again".

The expression was used by the Queen in a rare address to the nation at the beginning of the COVID-19 pandemic.

"The grief of this day - felt not only by the late Queen's family but all round the nation, Commonwealth and world - arises from her abundant life and loving service, now gone from us," the Archbishop said.

As the Abbey service came towards its end, the Last Post, the second of two bugle calls of the British Army played at military funerals and acts of remembrance, was played by the same musicians who performed it at the funeral of the Queen’s husband, the Duke of Edinburgh, before the nation came to a standstill in a two-minute silence in memory of the Queen.

Queen Elizabeth’s personal bagpiper paid a poignant tribute to the late monarch with a moving rendition of the traditional lament: ‘Sleep, Dearie, Sleep’ to close the Westminster Abbey service.

The congregation fell silent as Pipe Major Paul Burns played the traditional song, while a tearful King Charles, his siblings and his children watched on.

Also played were Reveille and the British National Anthem as the state funeral came to an end and the Queen embarked on her final journey to the Royal Vault beneath St George's Chapel at Windsor Castle.

King Charles led a sombre procession behind his mother's coffin from the Abbey. The coffin was taken to the Wellington Arch at London's Hyde Park Corner, to the toll of Big Ben, the Great Bell of the striking clock at the north end of the Palace of Westminster in London.

From there, the coffin was placed in a state hearse and driven to Windsor Castle, where there was a smaller and shorter committal ceremony.

King Charles stood silently as the National Anthem was sung and a handwritten message from him was placed on his mother's coffin.

It read: "In loving and devoted memory. Charles R."

Prince William and Prince Harry walked side-by-side behind their father in the procession.

The King walked alongside his siblings, the Queen's children: Princess Anne, the Princess Royal; Prince Andrew, the Duke of York, and Prince Edward, the Count of Wessex.

The procession to the Abbey saw the State Gun Carriage carry the coffin, drawn by 142 sailors to sounds of rhythmic pipes and drums.

The event was watched by millions of people across the country and around the world, with the Queen having acted as head of state for 14 Commonwealth realms.

Attended by a smaller congregation of about 800 guests, the committal service was conducted by the Dean of Windsor, David Conner, with the benediction by the Archbishop of Canterbury.

The Queen’s casket was lowered into the Royal Vault at St George’s Chapel.

At a private family service later in the evening, the casket of the Queen was buried alongside her husband, the Duke of Edinburgh, Prince Philip, at the King George VI Memorial Chapel, located inside St George's Chapel.