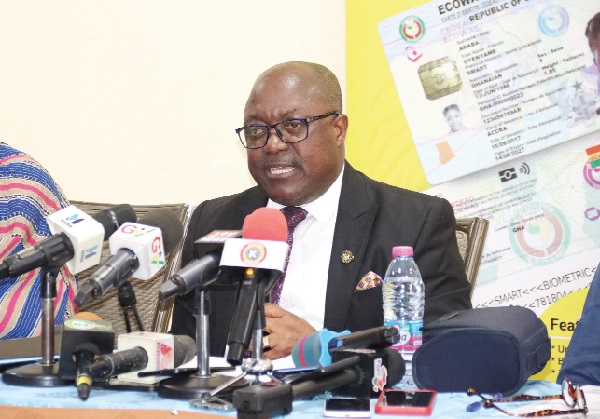 The National Identification Authority (NIA) is rolling out the next phase of its registration exercise to allow all eligible Ghanaians to acquire their Ghana Card, which will soon become the only accepted form of national identification.

Those to be considered for this next phase will include Ghanaians living abroad and children from zero up to 15 years.

The Executive Secretary of the NIA, Professor Kenneth Agyeman Attafuah, said this at a brief event as Ghana joined the world to mark Identity Day For Africa (ID4Africa), which fell on September 16.

Formed in 2014, the ID4Africa is a non-governmental organisation (NGO) and Pan-African movement which helps African nations build the strategic capacity required for developing “robust and responsible identity ecosystems in the service of development and humanitarian action".

Its aim is to promote the provision of legal identity in Africa for every human being everywhere.

Ghana has been a member of the ID4Africa since 2015.

Prof. Attafuah said the aims and principles of ID4Africa were harmonious with its mandate to create, maintain, provide and promote the use of national identity cards to advance economic, political and social activities in the country.

In furtherance of that mandate, he said, the NIA was determined to ensure that all eligible persons who required national identity recognised globally were registered and issued with their cards.

Consequently, he said, the authority had projected its key activities for 2022 to 2025 with datelines for its phase two of the registration exercise, with the registration of Ghanaians in the Diaspora set to start in November this year.

The exercise for children would take off by the end of the year, he added.

He said already the NIA had expanded its offices and operations and rolled out other interventions as and when needed.

Those interventions included mass registration exercises, the establishment of 16 regional offices and 276 operational district offices, as well as premium centres, he said.

Prof. Attafuah said to ensure a successful exercise, the NIA was counting on the embassies and high commissions around the world, as they would have a more credible database.

“The authority is facilitating a collaboration with Ghana’s embassies and high commissions around the world to register all Ghanaians resident outside the country,” he confirmed.

"Registration and issuance of smart cards to Ghanaians between the ages of six and 15 will start from December 2022 or early January 2023 and the NIA intends to register approximately 1.5 million children in this age bracket," he added.

The NIA Executive Secretary further indicated that the registration of refugees in Ghana, as well as Ghanaians in places of detention, such as prisons, cells, mental hospitals and asylums, would form part of the key activities of the authority from 2022 to 2025.

He, however, did not give datelines for those, saying “when all modalities on these two phases of registration are finalised, the NIA will put out the commencement dates”.

Prof. Attafuah confirmed that so far, 17,109,627 people had been registered since the exercise began in November 2017.

Additionally, 161,007 cards had been issued to non-citizens in the country, he added.

He said 1,283,479 cards remained uncollected for various reasons, including some needing updates, others unable to locate their collection points, while others were also not showing up to collect them because they “feel they have no need for them now”.

He said the authority had successfully completed data harmonisation with the key agencies needing the data for verification purposes and transactions, and for which the process has been seamless.

"The NIA has completed data harmonisation and transfer of data sets to the key institutions — the Bank of Ghana, 26 universal banks, the Ghana Revenue Authority, the National Health Insurance Authority and mobile network operators — following the execution of MoUs with them.

"It must, therefore, be appreciated that Ghanaians who have registered but have not yet been issued their Ghana cards can still be verified by the banks and the telecommunication companies if the verification devices specified by the NIA are available at these facilities," he said.

“Regrettably, the NIA was compelled to close down those additional registration points following the announcement in March 2022 of the extension of SIM card re-registration to the second deadline.

“The announcement in March 2022 of the extension the re-registration to the second deadline of 31st July, 2022 resulted in the dramatic non-patronage of those points.

“With the approach of the new deadline of September 30, 2022, the demand for the card has returned and skyrocketed, triggering the need for extra-budgetary resources to accommodate the avalanche of demand,” he indicated.

Prof. Attafuah gave an assurance that the NIA would ensure that all people who had registered were able to go for their cards, since the cards had already been printed at a cost and had to be issued out.