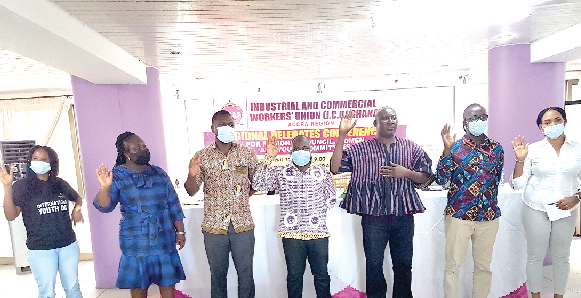 The Industrial and Commercial Workers Union (ICU) has appealed to the Attorney-General (A-G) and Minister of Justice to expedite action on the process to prosecute persons whose actions led to the closure of seven banks in the country.

The General-Secretary of the ICU, Mr. Solomon Kotei, expressed concern about the delay in initiating court action against those implicated in the crisis after the Bank of Ghana (BoG) had concluded investigations into the collapse of the banks.

Addressing delegates at the Greater Accra Regional Council of Women and Youth Conference of the ICU in Accra last Wednesday, Mr. Kotei said the time had come for the A-G to either name those implicated in the BoG clean-up exercise and initiate court action against them or clear them of any wrongdoing.

“Even if the wheel of justice grinds slowly, one year is enough for action to be taken. However, It seems those alleged to have used dubious means to acquire wealth at the expense of the ordinary people are enjoying their booty freely, while their victims continue to bemoan their losses.

“This is the pain of the ICU, especially considering the fact that employees who were engaged to work in the affected banks did not know that their employers used fraudulent means to start their operations,” he said.

The banks affected by the BoG exercise about two years ago included uniBank, the Beige Bank, the Sovereign Bank, the Construction Bank, the Royal Bank, Capital Bank and the UT Bank.

Some 49 micro-finance companies were also affected in the exercise, leading to many workers losing their jobs.

The ICU General-Secretary further entreated the government to compensate banks exonerated after the clean-up exercise to enable them to start operating their businesses and offer employment to qualified youth.

Mr Kotei said the collapse or closure of the banks for supposed financial improprieties had aggravated the fight against unemployment and heightened the poverty index in the country, adding that the loss of a job by one person could have a ripple effect on an entire family.

Furthermore, he urged the government to lower the rate of tax exacted on formal sector workers in the form of “Pay as you earn (PAYE)”.

He said instead of expanding the tax net for more people, including those in the informal sector, to honour their tax obligations, the burden of tax had always been on the poor worker.

“The government should, as a matter of urgency, extend the tax net to include all those operating in the other sectors of the economy, especially the big-time business captains, for total national development,” Mr. Kotei added.

The Greater Accra Regional Officer of the ICU, Mr. Thomas Atiah, also urged the government to put measures in place to curb the upsurge in robbery in the country.

“The rising spate of armed robbery has put many workers in great fear. Since some robbery cases take place in broad daylight, with others in the night, the lives of workers are at stake,” he said.

Ms. Belinder Cochraine of DAS Pharma was elected the Chairperson of the ICU in the Greater Accra Region, while the Chairman of the Local Union of the Graphic Communications Group Limited ( GCGL), Mr. William Ashaley, was chosen as her vice.

Ms. Anita Yirenkyi was also elected as the Chairperson of the Regional Women Executive Committee, with Ms. Ransfordina Kwegyir Aggrey of the SG Bank as her vice.