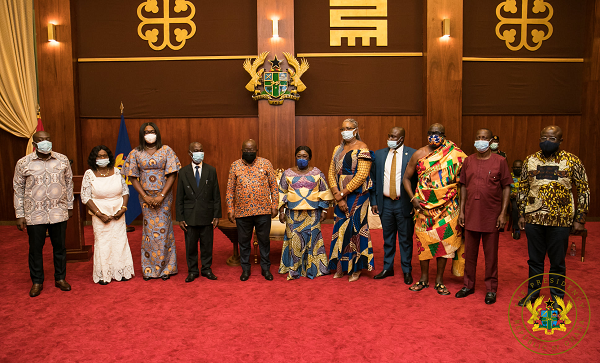 President Nana Addo Dankwa Akufo-Addo Monday inaugurated a seven-member Governing Board of the Right to Information Commission, with a call to ensure its work is guided by the rule of law, free speech and attachment to justice.

At a short ceremony at the Jubilee House, Accra, the President congratulated them on their appointment, saying that they were carefully chosen to undertake the all-important national duty.

He told the Board that as an independent body established to safeguard the constitutional right to information, "your work must be guided at all times by respect for the rule of law, adherence to freedom of expression and the unequivocal attachment to justice."

"You have been identified as persons of truth and integrity, and as persons who are familiar with the considerations of the law... and I am confident that you would discharge your duties efficiently and effectively," he said.

The implementation of the Right to information Bill, first drafted by the Institute of Economic Affairs, began in 1999, having undergone several revisions, with successive governments lacking the political will to pass it.

The Law was enacted and given accent by President Akufo-Addo on May 21, 2019. It became operational in January 2020. It (RTI Law) demanded that a Commission be established to promote and enhance access to information by the citizenry.

The seven-member Board is mandated to resolve complaints through negotiations, conciliation, mediation arbitration, and dismissing application for access to information if it considers the application to be frivolous or vexatious.

It will give specific directions in matters concerning confidential information and other circumstances, which the Commission considered appropriate, among other things.

President Akufo-Addo, who was delighted to be the president under whose tenure the development was taking place, noted that the inaugural ceremony further deepened the country's attachment to the values and ideals of the open society governed by the rule of law.

He emphasized that the steps taken towards the realisation of the RTI Law demonstrated the determination of his administration to adhere to the principles of accountable governance, entrenched democracy, and the fight of corruption.
The President urged the Board to ensure the proper functioning of the Commission, saying: "The diversity and composition of this Board must come to bear on the decisions of the Commission in resolving complaints and other matters that may come to it".

"The ultimate beneficiaries of the decisions of the Board, indeed, will be and must be the Ghanaian people," he said, assuring the Commission that government would provide it with the requisite resources needed for its full operation.