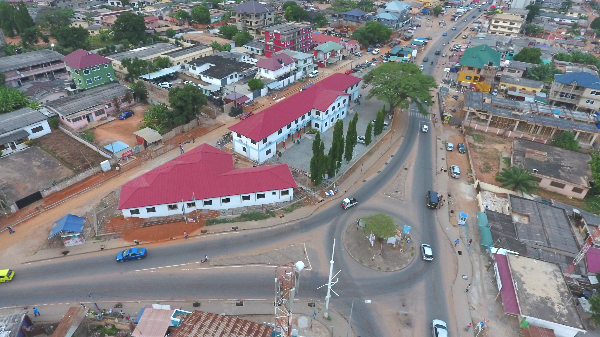 Pressure is mounting on the Ablekuma North Municipal Assembly to pull down its newly constructed office complex situated on a reserved zone at Dansoman Sharp Curve in Accra.

The Department of Urban Roads (DUR) and the National Engineering Coordinating Team (NECT) have asked the assembly to comply with their orders to pull down the building situated on the reserved shoulder of the road.

Last Thursday, officials from the NECT stormed the assembly to demand the demolition of the building.

But the Municipal Chief Executive (MCE), Mr Kofi Ofori, said the assembly would hold a management meeting next week to take a decision on the demand by the two bodies.

“If we have to demolish, we will demolish, but since the structure is government property, we have to meet to take that decision,” he said in an interview.

The assembly had been served twice by the NECT to pull down the building, but they have not been complied with.

According to the NECT, the problem was widespread, as all assemblies were flouting the 150-feet distance rule set by the government.

“We wrote to the assembly in 2020 to demolish the building, and again wrote to it in 2021, but neither of the letters was acknowledged by the assembly,” Mr Alex Kwadwo Asamoah, the officer in charge of Acquisition and Utilities Coordination at the DUR, said.

The Chairman of the NECT, Dr Kenneth Ashigbey, said it was a “shame” that the assembly was flouting its own laws.

The NECT, which was established 25 years ago, is made up of 37 institutions, including the utility companies and other government institutions, ministries, departments and agencies.

A meeting was held on Wednesday, December 29, 2021 between the various agencies and the Minister for Local Government, Decentralisation and Rural Development, Mr Dan Kwaku Botwe, on the action of the assemblies, including the Ablekuma North Municipal Assembly.

According to Mr Ashigbey, the minister had promised to remedy the situation.

He cautioned against the rezoning of road reservations by metropolitan, municipal and district assemblies.

He said the rezoning and encroachment on reserved spaces had rendered future development and expansion of roads difficult, for which the government had paid compensation.

Mr Ashigbey noted that between 2020 and 2021, over GH¢100 million was paid as compensation by the utility companies to individuals who had encroached on their space.

He said the widespread encroachment on reservations had affected underground utility lines, including those built by the Electricity Company of Ghana (ECG), the Ghana Water Company Limited (GWCL) and the telecom companies.