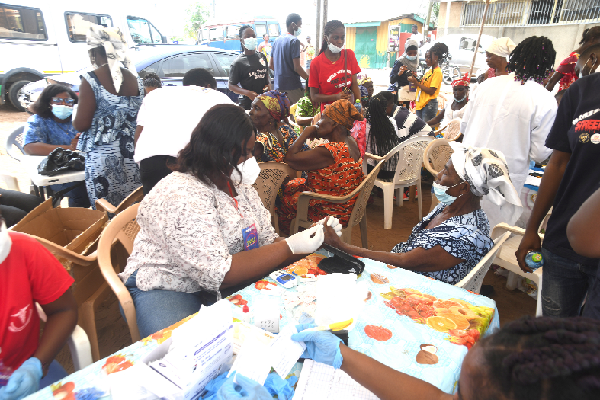 The Ghana Journalists Association (GJA) and four other organisations have organised a free healthcare and deworming exercise for over 1,000 residents of Chorkor and its environs in Accra.

The other organisations are Aim Ghana, the Give Me Hope Foundation, the Glimmer of Hope Foundation and the Watch Your Tongue Campaign.
Medical conditions checked during the exercise included diabetes, hypertension, bodily pains, sight and hearing impairment and sexually transmitted infections.

Apart from checking people’s health conditions, the medical team also provided them with medication, while those with complicated conditions were given medical forms to seek further treatment.

Besides, the residents were provided with food, drinks and clothing, while nursing mothers were given diapers, with children and the elderly being given free hair cut.

The Member of Parliament for Ablekuma South, Mr Alfred Oko Vanderpuiye, speaking at the event, expressed his gratitude to the various organisations for supporting the deprived communities in Chorkor.

"Your efforts send a message of your commitment to improve the lives of the people of Chorkor," he said.

The MP noted that items provided for the people would be put to good use and yield results by way of improving their health conditions.

For his part, the President of the GJA, Mr Affail Monney, thanked the other organisations for their humanitarian gesture of mobilising health personnel for health care and provision of clothing and food for the people within the Chorkor community.

He said it was not alien for journalists to be associated with such humanitarian services.

He re-emphasised that the SDG 3 goal underlined the need for the media to maximise their contributions to achieve food security, promote good nutrition and sustainable agriculture to improve the health of people of all ages.

Mr Monney commended media institutions which were playing a frontline role to help achieve the SDGs by championing education on road safety and the fight against galamsey to propel the nation where it should be.

''The health profile of people, the state of sanitation and the struggle to feed ourselves underline the need for the media to give of their best to attain good health for the people,'' he said.