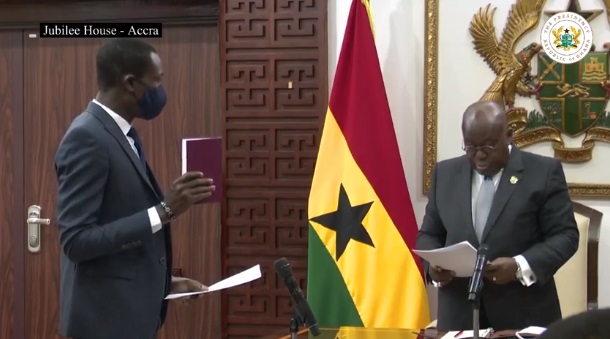 Legal practitioner Mr Kissi Agyebeng has been sworn in as the new Special Prosecutor of Ghana.

Mr Agyebeng was administered the Oath of Office and the Oath of Secrecy by President Nana Addo Dankwa Akufo-Addo today, August 5, 2021, at the Jubilee House in Accra.

He was approved unanimously by Parliament for the role last week after vetting by the Appointments Committee.

Mr Agyebeng becomes the second person to occupy the office of Special Prosecutor after Mr Martin Amidu who resigned in November 2020 amidst controversy.

In an address after the swearing-in ceremony, President Akufo-Addo said Mr Agyebeng's professional and academic background is proof that he is "eminently qualified to occupy the office of Special Prosecutor".

President Akufo-Addo said: "He has the capacity, the experience, the requisite values and intellectual strength to succeed in this vital position.

"I urge the new Special Prosecutor to bear in mind at all times that the office carries an extraordinary responsibility to fight corruption independently and impartially".

President Akufo-Addo also assured that like his predecessor as SP, the Executive will respect the independence of his office and provide him with the assistance to discharge his duties effectively.

No regrets over Amidu appointment

The President said he had no regrets in spite of the unfortunate events that led to the resignation of Mr Martin Amidu as Special Prosecutor.

He said as President, he always ensured that Mr Amidu's office was resourced.

On his part, Mr Agyebeng pledged that as SP he would work assiduously to suppress and repress corruption in Ghana to its barest minimum.

According to him, the country was currently dealing with two pandemics in health and corruption.

I was not involved in the Agyapa deal - Kissi Agyebeng

There is no way I can stop corruption - Kissi Agyebeng

According to his profile, on the University of Ghana School of Law website, Mr Agyebeng has been a lecturer since October 2006, teaching and researching into Criminal Law, International Humanitarian Law, International Law, Corporate Law and Legal Research and Writing.

Watch the ceremony below;