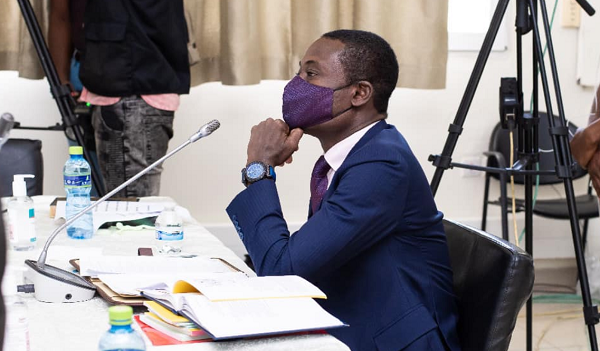 The Special Prosecutor nominee, Mr Kissi Agyebeng, is being vetted today [Thursday, July 22, 2021] by the Appointments Committee of Parliament.

Mr Agyebeng was nominated by President Akufo-Addo following the resignation of the Special Prosecutor, Mr Martin A.B.K. Amidu on November 15, 2020.

Per section 13 (8) of the Office of the Special Prosecutor Act, 2017 (Act 959), when the position of the SP becomes vacant, the President shall, within six months, appoint another qualified person for that portfolio.

When approved by Parliament, Mr Agyebeng will become the country's second Special Prosecutor after the setting up of that office in 2017.

Watch the vetting below;

The setting up of the OSP was one of the key campaign promises made by then-candidate Akufo-Addo ahead of his electoral victory in 2016, and it is aimed at tackling corruption much more vigorously.

Mr Amidu, the first SP, was sworn into office by President Akufo-Addo on February 23, 2018, after he had been duly vetted and approved by Parliament.

However, he resigned after nearly three years in office, citing what he described as “political interference in the independence of his office”, especially in relation to the corruption risk assessment he conducted on the Gold Royalties Monetisation Transaction arrangement, popularly referred to as the Agyapa Deal.

His allegations were vehemently refuted by the Presidency.

A detailed response contained in a letter signed by the Executive Secretary to the President, Nana Asante Bediatuo, explained that at no point did President Akufo-Addo interfere or attempt to interfere with the work of the OSP.

According to his profile on the University of Ghana School of Law website, Mr Agyebeng has been a lecturer since October 2006, teaching and researching into Criminal Law, International Humanitarian Law, International Law, Corporate Law and Legal Research and Writing.