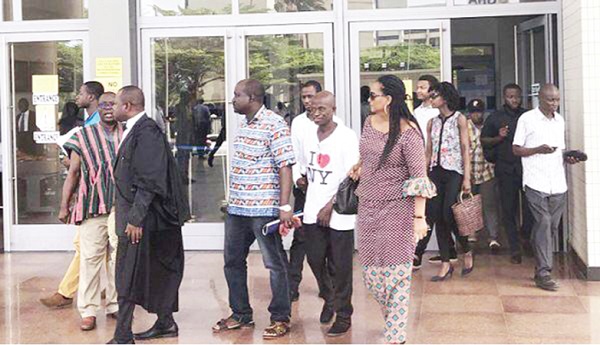 Flashback: Family members of Major Mahama leaving the court premises after one of the hearings Follow @Graphicgh

The Accra High Court has dismissed a submission of ‘no case’ filed by the 14 persons standing trial over their alleged involvement in the killing of Major Maxwell Adam Mahama.

In a ruling yesterday, the court held that the submission of ‘no case’ had no merit because the prosecution had been able to establish a prima facie case against the 14 accused persons.

Consequently, the court, presided over by Justice Mariama Owusu, a Justice of the Supreme Court sitting as a High Court judge, directed the accused persons to open their defence.

In view of the court’s decision, the first accused person, William Baah, a former Assembly Member for Denkyira Obuasi, is expected be the first to take the stand and open his defence on July 18, 2022.

Submission of no case

A submission of ‘no case’ is a right granted to accused persons under Section 173 of the Criminal and Other Offences Act (Procedure) Act, 1960 (Act 30).

It allows accused persons to convince a court that the prosecution had failed to make a prima facie case to warrant the opening of their defence.

In the event a trial court finds merit in a submission of ‘no case’, the accused persons are discharged, but if not, they are directed to open their defence.

A submission of ‘no case’ can be filed by an accused after the prosecution brings its case to a close.

In total, the prosecution handling the trial called 14 witnesses to make its case.

The witnesses were accordingly cross-examined by lawyers for the accused persons.

Major Mahama was killed at Denkyira Obuasi in the Central Region on May 29, 2017.

A video recording of how he was supposedly lynched went viral on various social media platforms, sending shock waves among the public.

Fourteen people, including William Baah, are standing trial in connection with the death of the military officer.

The facts, as presented by the prosecution, were that Major Mahama was the commander of a military detachment stationed at Diaso in the Upper Denkyira West District in the Central Region to check illegal mining activities.

At 8 am on May 29, 2017, Major Mahama, wearing civilian clothes but with his sidearm, left his detachment base for a 20-kilometre jogging.

At 9:25 a.m., the military officer got to the outskirts of Denkyira Obuasi, where a number of women were selling foodstuffs by the roadside.

He stopped to interact with the women and even bought some snails, which he left in their custody to be taken up on his return from jogging.

While he was taking out money from his pocket to pay for the snails, the woman from whom he had bought the snails and a few others saw his sidearm tucked to his waist.

Soon after he left, one of the women telephoned the assembly member for Denkyira Obuasi to report what they had seen.

“Without verifying the information, the assembly member mobilised the accused persons and others, some now at large, to attack the military officer,” the prosecution stated.

It added that the mob met Major Mahama near the Denkyira Obuasi cemetery and, without giving him the opportunity to explain and identify himself, “attacked him with implements such as clubs, cement blocks and machetes, killed him and burnt a portion of his body”.