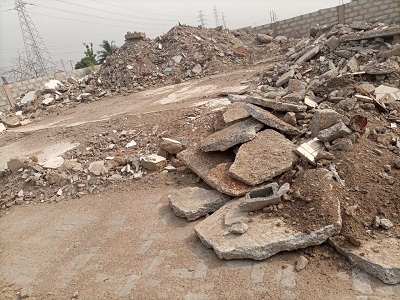 Some of the buildings demolished by the land guards Follow @Graphicgh

Residents of Nmai Dzorn and Adjiringano in the Adenta Municipality of the Greater Accra Region continue to live in fear due to the constant threats of land guards who go about their activities with careless abandon in the area.

The land guards alleged to be hirelings of an estate developer operating in the area who go about harassing residents, demolishing people’s buildings and forcefully taking over land and properties belonging to individuals in the area on daily basis.

Not even formal complaints to the Ghana Police Service will deter the thugs from carrying out their dastardly acts as they are said to have the backing of some big men in society.

Mostly armed to the teeth, the land guards invade individuals developing their properties in the area, assault, beat them up and in some cases demolish properties without any authorisation.

The constant harassment and molestation by the land guards have left most residents in the area in fright as they are subjected to the tooting of gun shots on daily basis.

Speaking to the Ghanaian Times in Accra after a visit to the area at the weekend, the Operations Manager of Villa Posillipo Ghana Limited, the company issued with authorisation by the Gborbu Wulomo-Shitse to overlook and protect lands at Santeo and the Borteman (Trasaco) enclave, Niibi Ofori Quaye, said for more than two years now, the people of the area had been subjected to harassment by these land guards.

He noted that most of the residents had become helpless and hapless because several complaints to the police had yielded no results.

Niibi Quaye, who is also the direct uncle to the Paramount Chief of the Nungua Traditional Area, said on January 12, 2022, the Nma-Dzorn Mantse, Nii Bormnai Alarbi Petenpeh III, in the company of the Gyase-tse of Klagon, Nii Bortey, one Pastor Wisdom Tarkum and one other who had gone to visit his land in the area, were allegedly accosted by the land guards and beaten up.

Niibi Quaye said Topkins Ghana Limited owned by Benjamin Danso sometime in 2002 legitimately acquired about 62 acres of land in the area from the Nungua Stool.

However, the acquisition of the land subsequently became a subject of litigation between Topkins Limited and Empire Builders, owners of Trasaco Estates.

He said Topkins won the case at the Supreme Court and the Nungua Traditional Council which was a party to the suit was declared the lawful owners to the lands in that enclave.

Niibi Quaye alleged that Mr Danso had taken advantage of the judgment by the Supreme Court and was taking over lands and properties outside the 62 acres it legally acquired including 25-acre land adjoining Trasaco on the Tema Motorway, “even though it did not form part of its 62 acres.”

Niibi Quaye said the Nungua Traditional Council would employ all the legitimate means under its authority to defend what was legitimately theirs.

Meanwhile, despite assurances by Mr Danso to provide his side of the story on Tuesday when contacted on Sunday, he did not pick up his phone after several calls were placed to him on Monday and Tuesday.

Even though he denied the allegations on phone, he promised to provide this reporter the necessary documents to support his claims but has not done so at time of going to press.