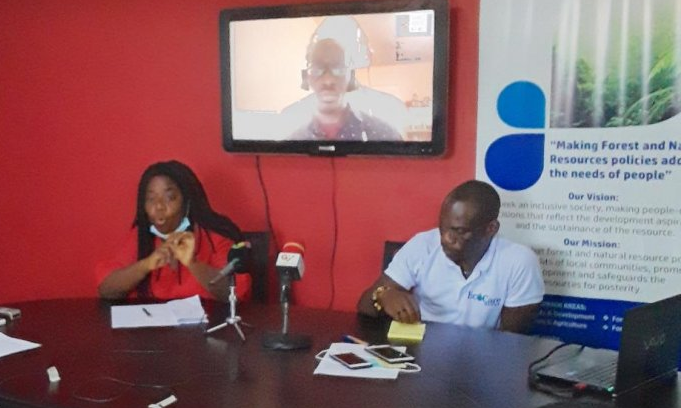 The NGOs through an initiative dubbed: “Easter Chocolate Scorecard”, bring to public attention chocolate producing companies that are not doing well to help prevent human rights abuses such as child labour and afforestation in cocoa producing countries.

The Easter Chocolate Scorecard initiative, introduced in 2018 in America and Europe by six international civil society organisations in the cocoa sector, is used to assess the activities of cocoa and chocolate processing companies against indicators such as human rights due diligence, transparency and traceability, deforestation and climate change, agroforestry, living income policies and child labour.

The initiators of the Easter Chocolate Scorecard, who launched the 2021 scorecard in Washington D.C., USA, last week, surveyed 31 chocolate companies and cocoa suppliers, estimated to be supplying over 80 per cent of the world’s chocolate confectionery for the exercise.

In all, only three companies received the Good Egg” award.

Speaking at the Ghana launch of the initiative via Zoom on Thursday, March 18, 2021, a Senior Advisor at Mighty Earth, one of the six NGOs that conducted the study, Samuel Mawutor, said the scorecard shows that the pace for adopting agroforestry and more climate friendly farming practices is much slower than required.

For him, transforming the cocoa sector from the problematic monocultures cannot be possible without a stronger focus on forest and farm restoration through agroforestry.

He noted that companies needed to transition from tree seedling distribution and invest many more resources into growing and nurturing planted trees on cocoa farms and trees tenure security to ensure the uptake of agroforestry at scales across West Africa.

Mr Mawutor expressed the hope that the scorecard would help to improve issues bothering on human rights, particularly child labour as well as to help contribute to avoiding deforestation and also improving the living standards of cocoa farmers.

“If a company does not know where their cocoa comes from, they cannot ensure it is not tainted by child labour, deforestation, or other abuses. Without transparency on the traceability, civil society cannot hold companies accountable. Transparent traceability is crucial as a bedrock for all other reforms,” he explained.

For his part, Managing Campaigner of EcoCare Ghana, a local non-governmental organisation, Mr Obed Owusu-Addai, said his outfit in collaboration with the Ghana Civil Society Cocoa Platform (GCCP), decided to localise the issues raised in the Easter Scorecard abroad and situating them within the context of current cocoa conversations in the country.

He said “in recent times, there has been both local and international concerns about the circumstances under which cocoa is produced, adding that “this has prompted several high level discussions on the future of cocoa production.”

He said in spite of the several billions of dollars accrued each year by the chocolate producing companies, many cocoa farmers in Ghana and Cote d’Ivoire, the two world’s leading producers of cocoa live in abject poverty.

“In Ghana, the average cocoa farmer lives on 82 cent per day while in Cote d’Ivoire, its around 54 cent per day,” Mr Owusu Addai noted.

For him, the “irony is that the chocolate industry is valued at over $100 billion (as at 2019) and Fairtrade International estimates that farmers only get six per cent of that multi-billion industry,” pointing out that “Majority of the financial benefits go to multi-national cocoa purchasing and processing companies based in Europe and United States of America.”

He expressed the worry that many of the multi-national companies in the cocoa sector had done little to improve the lots of cocoa farmers in many cocoa producing countries, particularly Ghana and Cote d’Ivoire.

“Every year, these multi-national companies invest in programmes in cocoa growing communities with the aim of improving productivity. They publish little gains made in a few communities and take them to their board of directors to camouflage the real problems in the sector,” Mr Owusu-Addai pointed out.

He noted, for instance, that many of the chocolate companies are failing to pay the living income differential meant to improve the wellbeing of farmers in Ghana and Cote d’Ivoire.

He was of the view that majority of the chocolate companies that were assessed on the Easter Chocolate Scorecard were only paying the base rate determined by the international market and are not paying extra to support the living income of farmers.

“Ghana and Cote d’Ivoire managed to get $400 dollars extra money as living income differential for farmers, but, what we found out was that these multinationals are using excuses such as COVID-19 pandemic to evade the payment of this extra income,” he explained.

Mr Owusu-Addai noted further that even the programmes that multi-national companies embark on in the cocoa growing communities, only 10 per cent of cocoa farmers in Ghana benefit from it.

“It is usually said that Ghana has 800,000 farm families, but the recent figures from COCOBOD when they were launching the Cocoa Pension Scheme indicates that there are over 1.5 million cocoa farmers. So only about 150,000 farmers are involved in these sustainability programmes but the multi-national companies use these programmes as an escape route to avoid paying equitable prices to farmers,” he noted.