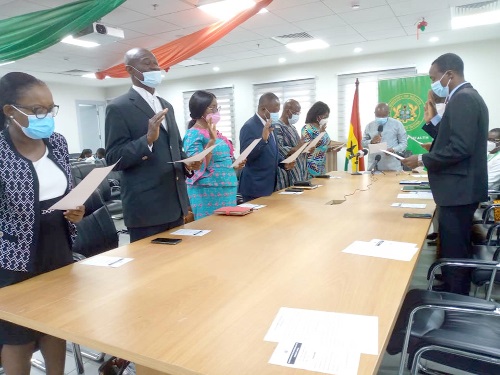 Mr Kwaku Agyeman-Manu (head of table), Minister of Health, swearing in the members of the new board of the Pharmacy Council
30.5k Shares

The Minister of Health, Mr Kwaku Agyeman-Manu, has charged the Pharmacy Council to clean up Ghana’s drug administration system with tighter restrictions and enforcement of pharmacy regulations to forestall drug abuse.

He has expressed particular concern about over-the-counter (OTC) sale of all drugs in some pharmacy shops when certain drugs could only be purchased with an approved prescription.

The minister, who was speaking at the inauguration of a nine-member board of the Pharmacy Council last Friday, said he was worried about how people could buy drugs dispensed in very high doses from simple chemical stores.

“Send your officials out and close the shops of people who are selling prescription drugs without prescriptions so that there will be sanity in the system,” Mr Agyeman-Manu suggested.

He said he could not comprehend how illiterates or lay people could know that the combination of some drugs could serve narcotic purposes.

“Is it not our own pharmacists who thought them? Those of us who have gone to the university and learnt the trade,” he said.

Such development, he pointed out, had led to the abuse of codeine, tramadol abuse, among others.

Mr Agyeman-Manu said drug abuse could be a big public health problem for the nation, and called for aggressive public education and strict regulation.

He said it was important to discourage indiscriminate use of medicines and other substances of abuse among, especially, the youth.

A number of experts have expressed similar concern over how people can walk into pharmacies, describe their symptoms to attendants, and then suggest and receive the medication they want without any tests.

The board shall hold office for a period not exceeding three years, and each member is eligible for re-appointment.

Mrs Addae-Afoakwa pledged the readiness of the board to enhance the effectiveness of the council, address rational drug use in the country and ensure professional pharmacy practice.

“We will change how things are done by the Pharmacy Council,” she said.

She said steps would be taken to regulate the sale or distribution of drugs through the streamlining and sanitising of drug distribution channels to reduce access to medicines of abuse.

On behalf of the members of the board, she expressed appreciation to President Nana Addo Dankwa Akufo-Addo for the confidence reposed in them, and to the Ministry of Health for its support to the Pharmacy Council over the years.