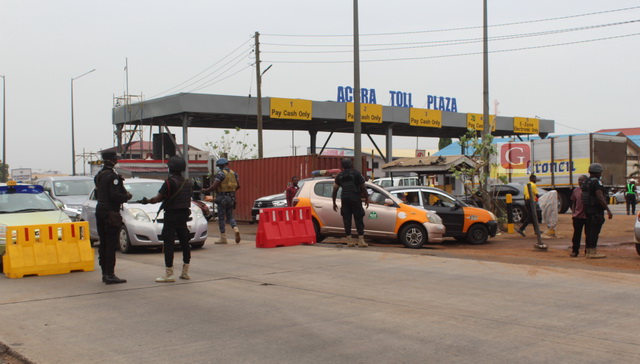 Dateline: Accra, April 1, 2020: There was more energy in the pace of security personnel supervising the partial lockdown imposed on the Greater Accra Region, as the restricted movement regime to control the spread of the coronavirus  (Covid-19) pandemic rolled into Day 3, on Wednesday.

Suddenly the number of checkpoints Wednesday morning increased several folds from what pertained on Days 1&2, and with it came cane-wielding, no-nonsense security officials.

This time, one needed a really good reason to go through the roadblocks, and from 10am, commercial vehicles – taxis and trotros, appeared to have only one fate in the Tema area, stay home or U-turn.

One trotro after another got the “Go back” orders, just as the taxis did, as the canes menacingly pointed the way.

From Afienya to the Tema end of the Motorway Roundabout, then through the Motorway to Tetteh Quarshie intersection, to the 37 Military Hospital to the Greater Accra Regional Hospital and then to the Accra Psychiatric Hospital down to Adabraka, one counted no less than nine checkpoints.

Each of these stops had some sort of a heavy vehicular traffic, but the Accra end of the Motorway was special. Traffic built up all the way to the Manet area, beyond one’s view, with a good number of them being taxis and trotros.

As they come in, they are shown the way back, and market women and others with good reason to continue their journey, grudging alighted and crossed over to hope for some good Samaritans to pass their way.

Some of the orders degenerated into mini arguments, but the police prevailed.

We deserve all this, when the president (President Akufo-Addo) announced the lockdown, he said on critical issued can be allowed but we are living our lives as though nothing has happened. Why won’t they be asking us to go back, quipped an obviously unenthused woman.

At Apolonia Junction, Afienya, two young men who attempted a brawl with the police following orders for them to return home were whisked away to the police station. They were insisting on going to fend for themselves in Tema and should be allowed to go. 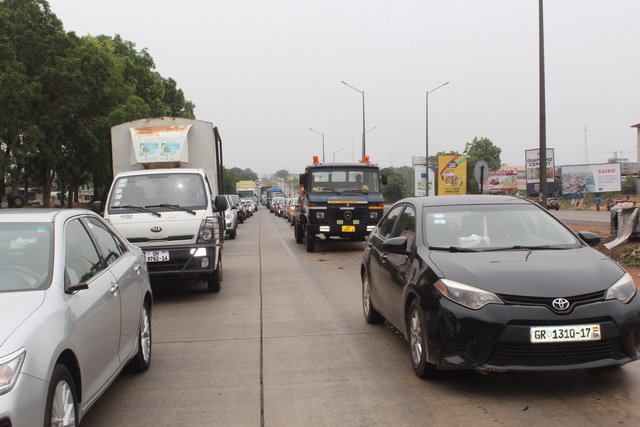 This disease is killing people all over the world, stay home so the situation can be managed too you say no, why are we so difficult? A police man at one of the check points complained, as he ordered people aboard a private vehicle to return home.

Some who claimed to be attending hospital had nothing at all to show, while some motor riders simply rode on while other vehicles were being attended to.

There are indications that the coming days will see a tighter monitoring of movements, especially as Ghana announced an increase of over 200 per cent confirmed cases on Wednesday.

The new situation is that Ghana has 195 confirmed cases, and people in their thousands are being tracked all over the country in a bid to curtail the spread before it gets out of hand.

The lockdown is in effect for two weeks, and affects Greater Accra and Kumasi and its environs.