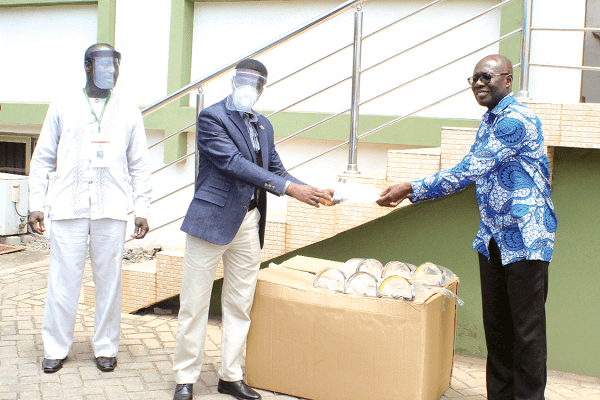 Mr Ebenezer Kakrah Hammah (2nd left) presenting some of the face shields to Dr Anthony Ofosu (right), Deputy Director-General of the Ghana Health Service. Looking on is Mr Emmanuel Asiedu (left), a Technical Advisor at the Ministry of Trade and Industry.
30.5k Shares

The COVID-19 pandemic is bringing out the innovation capabilities of some Ghanaians.

Already, a Kumasi-based entrepreneur, Mr Richard Kwarteng, has invented a solar-powered handwashing sink while a manufacturing firm in Accra, McHammah Engineering Company Limited, has produced face shields made from local materials for frontline health workers to aid in the fight against the disease.

During the President’s fifth address to the nation on the country’s status on the novel coronavirus pandemic, one of the people he singled out for commendation was Mr Kwarteng for his invention.

According to the young entrepreneur, it was the happiest day of his life to be publicly acknowledged by the President.

“It means my work is being recognised and it is a great feeling,” he told the Daily Graphic in Kumasi.

According to him, the idea for the design came during his visit to the city centre to buy some items for his shoe business to keep himself busy in the midst of the COVID-19 crisis  and that was when he came across some Veronica buckets.

“I also realised that one had to open the tap and close it after washing one's hands and that could defeat the purpose of the whole exercise of avoiding contamination,” he said.

According to him, he decided to come out with something that would not require the use of the hand to open and close the tap and avoid total contact with the tap during the handwashing exercise.

Even though he came up with the concept and the design, he said he had support from two friends, Edem Coffie, a welder, and Amankwah Boakye, an electrician, to complete the whole project.

The handwashing sink comprises a barrel fixed with a solar panel that controls the sensors and the flow of water and liquid soap. 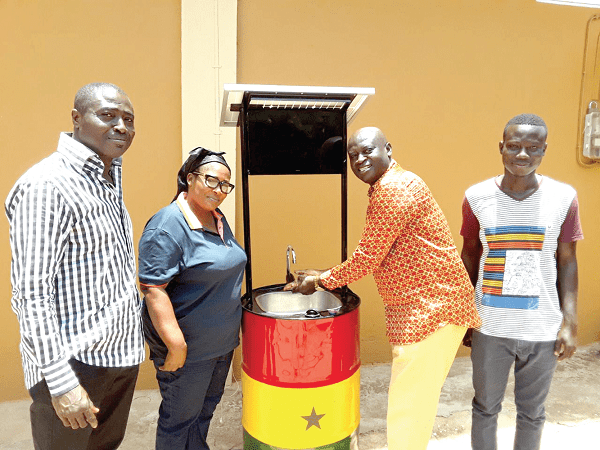 Richard’s father, Mr Osei Yaw Amankwah, trying his hands on the sink. With him is Richard (right) and his mother, Ms Angelina Osei Acheampong

It is programmed such that it first dispenses the soap when a person places the hand under the tap. The alarm is set to last for 25 seconds, giving enough time to thoroughly wash the hand before it dispenses water to rinse the hands.

The barrel is compartmentalised to hold clean water, soap and the waste water.

According to him, the barrel has the capacity to hold up to 80 litres of water, enough for 150 people to wash their hands before it is refilled.

Mr Kwarteng said the sink would still be useful even after the pandemic and added that lorry stations, restaurants and even churches could use them at their places of convenience.

He said the Ministry of Trade and Industry, through the National Board for Small Scale Industries (NBSSI), was supporting him to have the innovation patented.

According to him, the public response to the innovation has been overwhelming and transcending the borders of the continent.

“Prof. Patrick Loch Otieno Lumumba from Kenya also got in touch just to congratulate me on the innovation,” he said.

However, the young inventor said: “We are not in a hurry to go commercial and would want to get everything right before we start. So we are taking our time.”

The face shields produced by McHammah Engineering can also be worn by security personnel enforcing the lockdown in parts of the country reports Emmanuel Bonney.

Presenting 150 of the equipment to the Ghana Health Service (GHS) in Accra yesterday, the Chief Executive Officer of the company, Mr Ebenezer Kakrah Hammah, said the company was ready to collaborate with the government to produce the items on a large scale.

According to Mr Hammah, the company had all it could to expand production, adding that for instance, it could produce 500 pieces of the face shields in a day.

“All the materials are here in Ghana and we don’t need to import them, and this is good news,” he said.

Mr Hammah indicated that his establishment was waiting for an order from the government or private institutions to produce on a large scale.