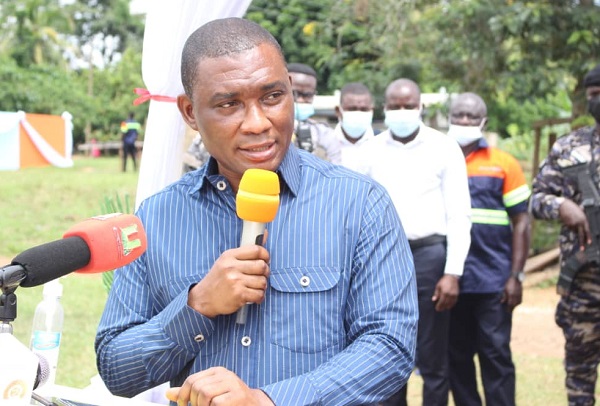 The Deputy Minister of Lands and Natural Resources in charge of Mines, George Mireku Duker, has made a passionate appeal to the youth of Kenyasi, the management and the staff of Newmont Mining Limited to bury the hatchet and allow peace to prevail.

The deputy minister said both the mining company and the community owed each other a fiduciary duty, and that it was imperative that calm was restored for them to enjoy the full benefit of the relationship.

Addressing the community and the management at separate meetings last Friday, Mr Duker urged the two parties to employ dialogue as the means of settling their differences, warning that violence would only incur losses.

He asked Ghanaians to stand behind President Nana Addo Dankwa Akufo-Addo as he worked towards addressing the economic challenges.

The deputy minister was on a fact-finding mission to uncover the remote and the immediate causes of the chaos at Kenyasi No. 1 a week ago.


He is expected to submit his findings to the sector Minister, Samuel Abu Jinapor, who will forward them to the security agencies for necessary actions to be taken.

He described the incident that led to the death of one resident as unfortunate and said the Lands Ministry would collaborate with the community, Newmont and the security agencies to ensure that whoever acted untowardly was dealt with and lasting peace found. Mr Duker and his team from the ministry also visited the injured victims of the mayhem and expressed the sympathies of the sector minister to them.

He was optimistic that calm would prevail and some useful lessons would be picked up from the unfortunate incident.

The deputy minister also appealed to the traditional authorities to rally the youth and counsel them against violence and impress on them to exercise restraint in their bid to strive for what they believed was due their community.

“On behalf of the government, I send sincerest condolences and sympathies to everyone. The police are investigating the issue and the government will collaborate with them. We’ve visited those in the hospital and I will pass on the needed information to the relevant authorities to ensure that the right things are done,” he told the chiefs.

“I will urge you all to exercise restraint and be in the know that we are not overlooking the issue. The government is keenly following matters and my presence here is to show that we are with you and concerned about all that is going on,” Mr Duker said.

In his engagement with Newmont Mining Limited, Mr Duker advised them to cooperate with the security agencies to restore calm and ensure the safety of their staff.

He stated the commitment of the government to create an enabling environment for the company and other licensed mining companies to thrive.

Mr Duker also said the management of the company should take steps to establish a harmonious relationship with the traditional authorities to facilitate its smooth operation in the area.

One person died, while four others, who sustained gunshot wounds, are currently in stable conditions at the Banharit Hospital, a private health facility at Kenyasi No.1 in the Asutifi North in the Ahafo Region, following a confrontation between the youth and the police.

The incident happened last Monday evening when police officers deployed to protect operations and property of the Newmont Ahafo Mine at Kenyasi No 1 clashed with the youth in the area.

Although the Ahafo Regional Police Public Relations Officer, Inspector Kwadwo Boakye, confirmed the disturbances in the area, he told the Daily Graphic that official details would be made known through a press release later.