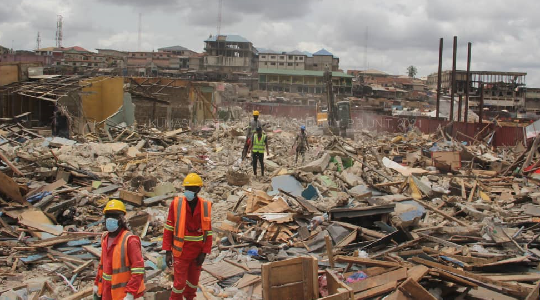 The last remains of the over 100 years old Kumasi Central Market — one of West Africa's largest open air markets — are being demolished to pave the way for the completion of work on the second phase of the redevelopment of the market.

Bulldozers moved to the site yesterday to bring down the remaining structures after the last batch of traders left the area at the weekend.

The Ashanti Regional Minister, Mr. Simon Osei-Mensah, had played a key role by providing full support to the Kumasi Metropolitan Assembly (KMA) to get the traders to relocate.

The final eviction caused a spillover of traders onto the pavements and other unauthorised trading areas, which caused a traffic gridlock in the central business district for most part of the day.

A taskforce was then deployed by the KMA to contain the situation as it threatened to prove counter-productive.

The market redevelopment project is expected to decongest the central business district, with the project design reserving an entire floor of the facility as parking space for commercial vehicles.

The regional minister said in an interview that the traders had been given grace period of about one year ever since the sod was cut for the project with the excuse that authorities had not prepared alternative places for them to operate.

"We have prepared the Afia Kobi Market, popularly known as Abinkyi Market, for these traders, but they keep giving excuses," he said, adding that adequate measures such as the provision of temporary stalls and the fixing of additional street lights at the market had been catered for.

"As we speak, the contractor has cleared 500 containers of equipment for the project, and there are additional 300 containers sitting at the port because the traders were reluctant to move," he told the Daily Graphic.

He assured the traders that once they had moved from the site, the construction of the new market — which was already halfway done — would be executed as soon as possible so that they could return in a more decent environment.

Meanwhile, there were brisk trading activities at the Race Course and Abinkyi markets yesterday, as first and second batches of traders appeared to have found their feet at the new trading places.

Some traders affected by the final eviction were now setting up their sales points.

At the Race Course Market, a yam seller, Maame Yaa Dufie, said when they moved there earlier, there were no signs that the market would boom, but with time the situation had improved.

She appealed to her colleagues, who preferred to sell on the shoulders of the road, to set up in the main market so that the place would get the needed patronage.

She appealed to the assembly to dispatch its task force to the central business district to ensure that all traders were cleared from the streets so that the temporary markets could be patronised.