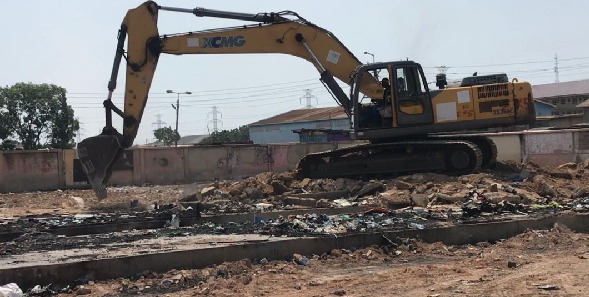 The bulldozer clearing conrete slabs to allow the leveling of the market
30.5k Shares

The Korle Klottey Municipal Assembly (KoKMA) has begun clearing debris at the Odawna market near the Kwame Nkrumah Interchange in Accra which was razed down by fire on Wednesday, November 18.

A visit to the market at 12pm on Tuesday, December 1, showed a bulldozer on site clearing concrete slabs constructed by the shop owners.

This is to allow the leveling of the market to create a temporary space for traders to sell till the end of the year.

No trader was seen at the market at the time of visit. 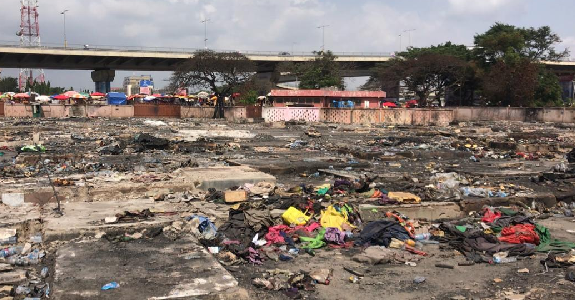 Present state of the Odawna market

The Municipal Chief Executive of the Assembly, Mr. Samuel Nii Adjei Tawiah, in an interview with Graphic online, said that the exercise was to give the traders a temporary place to sell during the Christmas period as sales were usually good.

He indicated that the leveling of the market would be completed before the end of the week.

“It is likely that we will finish clearing the place on Wednesday, December 2, or before the end of the week, so the traders can start selling their goods,” he said.

Mr. Tawiah also noted that the National Board for Small Scale Industries (NBSSI) and Microfinance and Small Loans Centre (MASLOC) per the assurance of President Nana Addo Dankwah Akuffo Addo during his visit to the market, have conducted their assessment and have taken the necessary data of the affected traders.

“The traders sell a lot of items and each trader has a different level of capital, so per the assessment of the NBSSI and MASLOC the trader will receive some loans to sustain their business, hopefully by the end of the week they will receive the money,” he said.

Mr. Tawiah, however, said the incident should be a wakeup call the kind of structures allowed to be put up and the operations of markets.

“In this case for instance, cylinders were discovered at the market, which should not be the case. We will designate a place for people who want to cook among others, as part of the new things we will incorporate when constructing market structures,” he said.

He said that the Odawna market will be rebuilding begin next year, adding that due diligence would be made to ensure its safety.

He, therefore, urged the Metropolitan, Municipal and District Assemblies (MMDAs) to enforce the by-laws particularly, to punish recalcitrant traders who flout them.