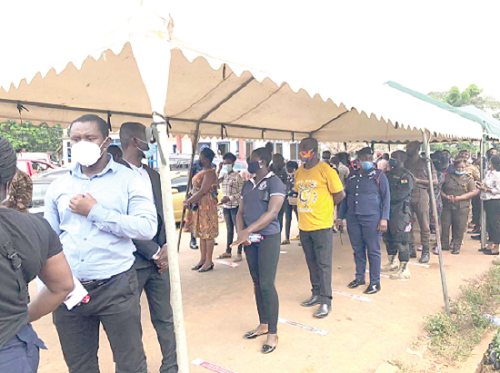 Eligible voters in a queue to exercise their franchise during the special voting in Accra. Picture : Esther Adjei
30.5k Shares

The special voting passed off successfully yesterday, characterised by a high turnout, orderliness and well-functioning electoral machines and devices.

The voters and election officials observed all the necessary coronavirus disease (COVID-19) safety protocols put in place during the voting process.

They included all voters washing their hands with soap under running water, sanitising their hands, wearing face masks and having their temperature checked before they were allowed to go through the voting process.

At almost all the polling centres visited, there were markings on the ground to alert prospective voters to observe social distancing.

In some places, some personnel could not find their names on the special voters list and were turned away.

Daily Graphic correspondents visited some of the polling centres in all the 16 regions.

From Kwadaso in the Ashanti Region, some security personnel who had gone to the polling centre to vote could not find their names in the register and had to return home.

Initially, the parliamentary candidate of the National Democratic Congress (NDC) in the constituency, Mr Eric Assibey, had tried to intervene by asking the Presiding Officer, Mrs Thelma Annan, to allow them to vote, but she declined.

She said they still had the chance to cast their ballots on Election Day, and that allowing them to vote would amount to an irregularity.

Mrs Annan later explained to the Daily Graphic that those affected were those whose names had not been submitted to the EC.

She said some people were of the belief that by virtue of their professions, they would be made to vote in the special voting without applying for it.

She said, however, that the process did not work that way, and that one would have to submit one’s name to be considered.

That challenge notwithstanding, all the stakeholders described the process as very smooth and peaceful.

From the Nhyiaeso Constituency in Kumasi, the voting, which took place at the Police Depot at Patasi, went on smoothly.

The two main parliamentary candidates, Mr Richard Prah of the NDC and Mr Stephen Amoah of the NPP, in separate interviews at the polling centre, expressed their satisfaction with the peaceful nature of the voting.

The Daily Graphic observed that one voter who could not be verified via thumbprint was verified through facial recognition.

In the Western Region, 5,390 special voters were expected to cast their ballots at the designated voting centres across the 17 constituencies in the region yesterday.

There were long queues at the Catholic Church Centre at Effia Kwesimintsim, the Takoradi Police Canteen and many other centres, but it took less than two minutes for a voter to go through the process.

There were agents of the two dominant parties, the NPP and the NDC, as well as those of a couple of other parties at the centres.

The centres also had detailed security persons to ensure law and order.

Meanwhile, some of the prospective voters were turned away, as their names could not be found in the special voters register.

From Bolgatanga, 5,948 eligible voters took part in the special voting in the 15 constituencies in the region.

A visit to the Upper East Regional House of Chiefs in Bolgatanga showed that the exercise took off smoothly at the two voting centres, A and B, there.

But the security men among the voters were very particular about the delay in starting the process.

According to some of them, they had arrived at the voting centres to vote as early as 4:30 a.m., but as of 7:30 a.m. some of them had not cast their ballots.

However, they were happy that the process took up to five minutes for them to cast their ballots after the initial delay.

When contacted on the issue, the Bolgatanga Municipal Director of the EC, Mr Yao Peprah, said electoral materials and officials were available before the scheduled 7 a.m. for voting to begin, but, unfortunately, the officials were quite slow in setting up the various equipment for voting to start on time.

Polls were orderly at Tema West where 376 out of 877 special voters had cast their ballots at the Tema Community Two Police Station as of 10 a.m. yesterday.

The exercise was generally orderly, as the eligible voters queued early at the two polling centres on the premises to cast their ballots.

At the Tema Community Eight Police Station polling centre in the Tema West Constituency, 250 voters had cast their ballots as of 11 a.m. when the Daily Graphic visited.

A total of 671 voters were expected to cast their votes in the special voting.

In the Central Region, the special voting came off smoothly at all the centres.

About 203 people, out of 819, had cast their ballots at the Kasoa and the Awutu Bereku police stations in the Central Region as of 10:32 a.m. yesterday.

The Awutu Senya East District Electoral Officer, Mr Dominic Agbanu, told the Daily Graphic: “We don’t have any problem. As you can see, everything is going on smoothly, with strict adherence to the COVID-19 safety protocols. At the end of the voting, we will keep the ballot boxes and everything in the Police Armoury.”

There were no hitches at the Galloway polling centres A and B in Koforidua in the New Juaben South Constituency in the Eastern Region.

More than 200 voters had cast their ballots by the time the Daily Graphic team visited the polling centres.

Ten security men were turned away because their names were not in the special voters register.

In the Volta Region, 7,325 people were expected to cast their ballots across the 21 polling centres across the region, with 1,472 voting at the Regional Office of the EC in the Ho Central Constituency.

Daily Graphic's visit to the voting centre indicated a calm atmosphere, with prospective voters patiently waiting for their turn to cast their ballots.

In the Wa Central Constituency in the Upper West Region, the exercise started at exactly 7 a. m. in many of the constituencies in the region.

According to the Returning Officer at the Court One A centre, Dr Joseph Wulifan, voting started on time without any hitches.

He said 434 voters were expected to cast their ballots, with Circuit Court One B too expecting 433 voters.

There were long queues at both polling centres, but voters waited patiently for their turns to cast their ballots.

More than 6,000 people were expected to cast their votes in the region.

The Northern Regional Director of the EC, Mr Lucas Yiryel, said there were 18 centres each for the 18 constituencies in the region.

As of 10.38 a.m. yesterday, 107 out of 231 voters had cast their votes at the Tamale Metro Office of the EC, the polling centre for the Tamale South Constituency.

The Tamale Metro EC Officer, Mr Bismark Nteh, said the exercise had been smooth, without any incident.

At the Cheriponi polling centre, as of 8 a.m. yesterday, more than 20 people had cast their votes, out of the 471 registered voters.

The North East Regional Director of the EC, Mr Gabriel Manu, told the Daily Graphic that the exercise went on smoothly without any incident.

From Sunyani in the Bono Region, the enthusiasm among special voters was high as hundreds of them turned up to exercise their franchise yesterday.

A total of 659 voters in Sunyani East and 235 in Sunyani West were expected to cast their ballots.

All the voters at the two centres had exercised their franchise without facing verification problems.

Those who went to the centres without their voters cards provided their names and were allowed to vote.