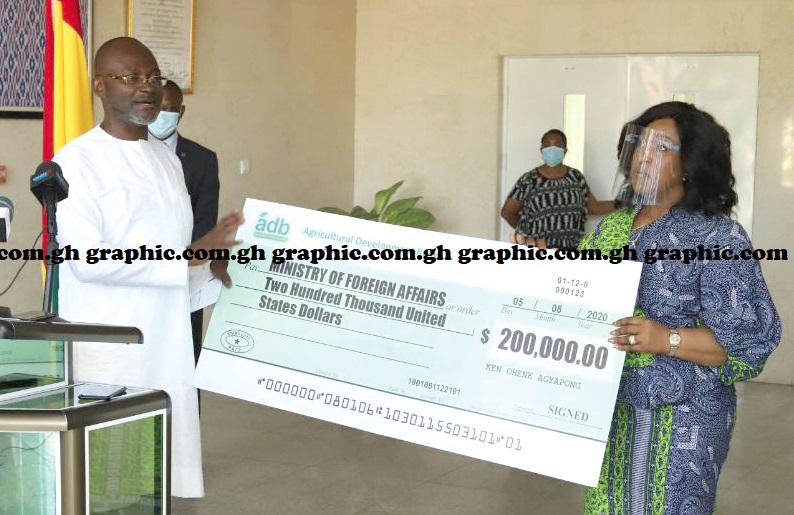 The Member of Parliament (MP) for Assin Central, Mr Kennedy Ohene Agyapong, has presented $428,650 to the Ministry of Foreign Affairs and Regional Integration to support the evacuation of more than 700 stranded Ghanaians in Lebanon.

Mr Agyapong contributed $200,000 himself, while he mobilised the rest through an appeal he launched for other Ghanaians to support the initiative.

The support will help cover the evacuation of the fourth and fifth batches scheduled for August 11 and 13, respectively.

At the presentation event last Wednesday, Mr Agyapong said: “It is not in everything that we expect the white man to save us or take care of for us. We need to prove that we are capable of managing our own affairs."

The Minister of Foreign Affairs and Regional Integration, Ms Shirley Ayorkor Botchwey, who received the cheque for the amount, said: "The generosity of Mr Agyapong is public knowledge and the donation today is only a testimony of his kind heart, and we expect this donation to fund the evacuation of 727 Ghanaians from Lebanon."

She said the government would bear the cost of quarantine of the evacuees when they arrived in Ghana, just as it had done for more than 3,000 of their compatriots who had been evacuated from various parts of the world, including China, the United Arab Emirates (UAE), Kuwait and Qatar.

"On behalf of the Government of Ghana, the Ministry of Foreign Affairs and Regional Integration and, indeed, all Ghanaians and the families who will be benefiting from this generous offer, I wish to thank you, my colleague and brother, Mr Agyapong, and all those who through your efforts have contributed to this noble cause," she said.

"By this act, you have proven to be a responsive statesman and patriot, and Ghanaians are grateful," she added.

Ms Botchwey said in a difficult time when the world was grappling with how to contain the COVID-19 pandemic and its impact on lives and economies, it was heart-warming to witness such acts of generosity, patriotism and solidarity from fellow Ghanaians.

She said when the first case of COVID-19 was recorded in November 2019 in the Chinese city of Wuhan, nothing could have prepared the world for the devastation it would unleash on human lives and world economies months down the line.

She noted that since then, the world had been at the mercy of this unseen, yet destructive virus.

"As a desperate measure to prevent the deadly virus from spreading within national borders, states locked down and also imposed travel bans and other restrictions, including border closures.

"Unfortunately, these measures left many travellers, including a number of Ghanaian nationals, stranded in foreign countries and unsure of when they will return home to their families," she said.

She intimated that it also brought to the fore the unacceptable dire conditions some Ghanaians abroad, especially those in the Middle East, were living under as a result of the pandemic.

Ms Botchwey said in view of the growing number of stranded Ghanaians abroad per the data gathered by the Ministry and its Diplomatic Missions abroad, the Government took the bold decision to begin the process of evacuating them home.

She said to ensure a well-coordinated evacuation exercise, the government decided to undertake the exercise in phases.

The minister said that decision was informed by financial and logistical considerations, such as the capacity of their quarantine and isolation centres to hold a large number of evacuees and the human resource capacity of the COVID-19 Task Force, made up of personnel drawn from the various security agencies.

She said the ministry, in collaboration with the Task Force, had since May 2020, completed 51 evacuations from across the globe, resulting in the safe return of 5,940 Ghanaians.

"So much has been done by the government since the outbreak of COVID-19 to mitigate the adverse effects of the virus on Ghanaians, but I must say that we are not out of the woods yet.

"There is still a lot to be done, and it is for this reason that the Ministry welcomes the support of benevolent individuals such as the Member of Parliament for Assin Central, Mr Agyapong," she stated.

"On the matter associated with our dear compatriots in Lebanon, I wish to reiterate our displeasure in the manner Ghanaian nationals in that country have been treated," the minister added.

She stressed that the government had in no uncertain terms registered its abhorrence to such inhumane treatment to the Government of Lebanon on the harassment and earlier reports of abuse to which Ghanaians had been subjected to by their Lebanese employers.