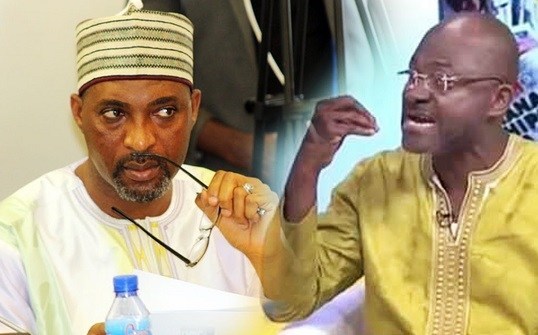 I would have given Muntaka 'flying kicks' - Kennedy Agyapong
30.5k Shares

The New Patriotic Party (NPP) MP for Assin Central, Mr Kennedy Agyapong says he would have beaten the Minority Chief Whip, Alhaji Mohammed-Mubarak Muntaka had he not been held back by his colleagues after a heated verbal exchange last year in the Parliamentary chamber.

When quizzed if he had reconciled with Muntaka since the incident in January 2019, Mr Agyapong said he had not because he does not deal with cheap people.

The controversial MP went on to detail how he would have assaulted the Asawase MP.

"Oh, hell no, I can't do that. I don't deal with cheap people. He (Alhaji Muntaka) is not relevant in my life," Mr Ayapong said on Metro TV's Good Evening Ghana on Tuesday night

"Oh sure, I would have given him some flying kicks, you will be surprised, I can still kick good... See, people are watching let's leave this idiot".

Mr Agyapong revealed that he was very violent as a youngster and was sent to live with his mother by his biological father for engaging in street fights.

The exchanges, which happened before the commencement of the business of the House, were occasioned by the referral of Mr Agyapong to the Privileges Committee of Parliament for allegedly inciting the public against the murdered journalists, Mr Ahmed Hussein-Suale.

Mr Agyapong blamed Alhaji Muntaka for raising the issue on the floor of Parliament last Tuesday, which necessitated the Speaker of Parliament, Professor Aaron Michael Oquaye, to refer him (Mr Agyapong) to the Committee.

The two legislators used unprintable words on each other.

It took the intervention of MPs from the Majority and Minority sides to restrain their colleagues from engaging in fisticuffs.

In the aftermath, Alhaji Muntaka apologised for the incident saying he should have restrained himself despite the provocation.

This was the second time Mr Agyapong had been referred to the Privileges following submissions by Alhaji Muntaka.

The first instance was when Alhaji Muntaka alleged that Mr Agyapong had made contemptuous remarks about Parliament and the Majority Leader, Mr Osei Kyei-Mensah-Bonsu.

Making a case against the conduct of Mr Agyapong in Parliament last Tuesday, Alhaji Muntaka said MPs were held in high esteem and also enjoyed some privileges provided for in the Constitution, which required of them to guard their utterances.

Alhaji Muntaka said Mr Agyapong’s comments, which were at variance with the requirements in the Code of Conduct of Parliament, were an affront to the dignity of Parliament.

He said it was necessary for the Privileges Committee of Parliament to be made to investigate the matter and punish him if found guilty of breach of privilege of Parliament.