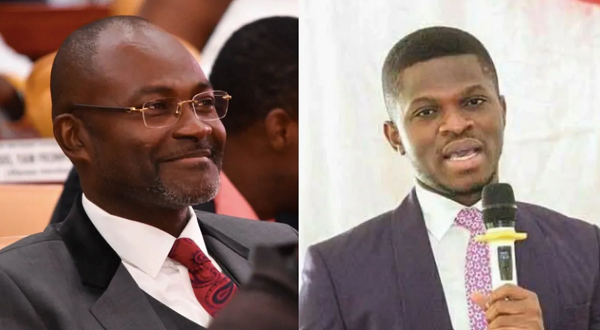 The National Communication Officer of the National Democratic Congress (NDC), Mr Sammy Gyamfi has filed a police complaint against the Member of Parliament for Assin Central, Kennedy Agyapong for allegedly threatening his life.

In a complaint filed on his behalf by his lawyers and addressed to the Director General of the of the Criminal Investigations Department (CID), Mr Gyamfi says the death threat was made by the MP in a broadcast on an Accra-based radio station.

"Our client informs us that Mr. Kennedy Agyapong, who happens to be the Member of Parliament for Assin Central and a leading member of the ruling New Patriotic Party (NPP), while on Accra-based Asempa FM's  radio programme 'Eko Sii Sen', on the 4th of August, 2020 threatened to cause harm and/or death to our client through thug under his control and direction," the complaint reads.

"While speaking in the Twi language on the said programme, Mr. Kennedy Agyapong stated among other things that, if our client does proceed with his advocacy on national issues in a particular manner, he shall in a matter of three seconds organise his thugs to beat and/or finish our client mercilessly" (Enclosed herein in a copy of the video recording of the said program".

The lawyers say Mr Gyamfi has since gathered intelligence which suggests that thugs have been contracted to carry out Mr Agyapong's threat.

"Since making the said criminal threats on Asempa FM, our client has come by credible intelligence that show that indeed, Kennedy Agyapong has contracted some thus to carry out the threats he issued on our client's life.

"Having regard to recent history and the notorious fact that, a prominent investigative journalist by name Ahmed Suale was shot and murdered in cold blood by some unknown criminals following similar threats made on his life by the same Mr. Kennedy Agyapong, our client, an a law abiding citizen, feels compelled to formally write to you and lodge a complaint against the said Mr. Kennedy Agyapong, so as to avert a ponsible repeat of what happened to the late Ahmed Suale when his life was threatened by Mr. Kennedy Agyapong on that very "Eko sii sen" platform and other media platforms".