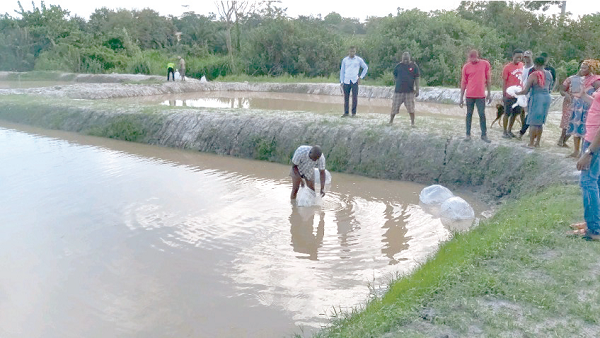 • Some fish farmers being taken through how to properly tend their fish during one of the training programmes
30.5k Shares

After heavy investments and the rolling out of special projects by the Fisheries Commission over the past three years in the Bono, Bono East and Ahafo regions, fish production is gradually improving in the areas.

The three regions are likely to overtake the rest in fish production in the next seven years, if the commission’s plans and strategies initiated are successful.

The investment included the introduction of Aquaculture for Food and Jobs, rehabilitation of the Dormaa-Ahenkro Hatchery and Training Centre and the training of 123 fish farmers in feed formulation and preparation.

Others are the construction of 213 additional ponds, the establishment of 99 new farms, training of 144 fish farmers on sanitation and biosecurity and 123 fish processors and traders on hygienic handling.

The commission has trained 123 fish farmers in feed formulation and preparation to reduce the cost of production and improve fish quality.

The Bono Regional Director of the commission, Dr Lawrence Armah Ahiah, who is also in-charge of the Bono East and Ahafo regions told the Daily Graphic in an exclusive interview that the Dormaa-Ahenkro Hatchery and Training Centre, which was to start production early next month, had the capacity to produce quality fingerlings.

He explained that the project, which was abandoned for more than 20 years due to technical and financial challenges, had been rehabilitated and upgraded by the commission to start the production of fingerlings.

“The Dormaa-Ahenkro Hatchery and Training Centre has been in existence for over 20 years but due to technical and financial challenges, the hatchery has remained non-functional,” Dr Ahiah stated.

That, according to him, had led to the encroachment of project lands, which had now reduced from its original size of 42 hectares allocated to the commission to five hectares.

Dr Ahiah explained that the project had gone through the second phase of construction to upgrade it to a state that could serve the numerous fish farmers in the three regions and beyond.

He said the second phase of the development included the construction of four concrete ponds and a hatching room complex and manual desilting of 15 earthen fish ponds, which were now in good shape for the raising fingerlings.

Dr Ahiah said one of the major challenges in the aquaculture industry in the three regions was how to obtain fingerlings, explaining that farmers found it difficult to get enough fingerlings for production.

He added that the centre would also produce fish feed and serve as a training centre for fish farmers and processors to help promote aquaculture and agriculture integration technology, as well as security for farmers.

He said the facility would also be used to promote modern fish processing technology and conduct trials on the new fish farming technologies in the regions.

Dr Ahiah said the centre would also be used as a regional Fish Data Management Centre, where data of fisheries in the regions would be kept.

Aquaculture for Food and Jobs

Dr Ahiah explained that the regions were also actively participating in the government flagship “Aquaculture for Food and Jobs” programme, which was instituted to promote aquaculture production and create jobs for the teeming youth.

“In this programme youth groups and institutions which are interested in participating in aquaculture are supported with fish ponds, fingerlings and feed,” he said and explained that three youth groups and the Dormaa Senior High School (SHS) had benefited from the programme.

“All the youth associations have 10/300 M2 earthen fish ponds, whereas the school has four of the same size constructed for them,” he explained.

He said that all the ponds were stocked with fingerlings and supplied with fish feed before handing over to the beneficiaries.