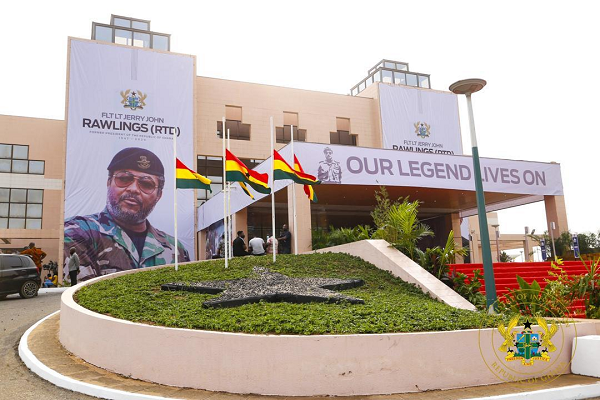 The body of former President Jerry John Rawlings has been laid in state at the Accra International Conference Centre (AICC) for mourners to file past.

It signifies the beginning of full-scale mourning from Monday morning as Ghanaians and mourners from the rest of the world begin paying their last respects to the late former President in a state funeral, which will last until Wednesday, January 27.

The Jerry John Rawlings Foundation, on behalf of the Rawlings’ family through the Ministry of Information has stated that no media house or any recording or picture taking gadget will be allowed into the lobby of the Accra International Conference Centre (AICC) where the mortal remains has been laid-in-state.

A statement issued by the Foundation through the Ministry of Information said the official production unit of the Jerry John Rawlings Foundation will provide live HDMI or SDI feed output for all proceedings.

It added that “Media houses that wish to have access to the live feed or photographs are requested to pick their feed from the Media Village that has been set up at the AICC for that purpose.”

Ghanaians will from Monday, January 25 to Tuesday, January 26, pay their last respects to the late former President who died at the Korle Bu Teaching Hospital on November 12, 2019, after a short illness.

Monday’s filing past is reserved for heads of the security agencies, leaders of political parties and the public.

Tuesday, the filing past will start with President Nana Addo Dankwa Akufo-Addo, Vice-President Mahamudu Bawumia, former Heads of State, as well as heads of constitutional bodies.

Members of the Diplomatic Corps and organised groups will also pay their respects on Tuesday.

The remains of former President Rawlings will be entombed at the Military Cemetery at the Burma Camp in Accra after a state funeral on Wednesday, January 27.