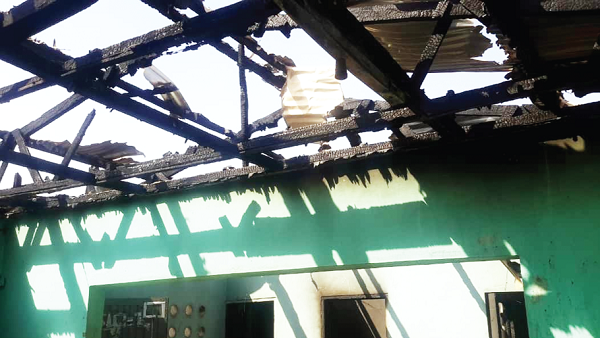 • Portions of the market destroyed by the fire
30.5k Shares

The Upper West Region has, since the beginning of the year, recorded 10 fire incidents, leading to two deaths, 14 injuries and massive destruction of properties.

The Regional Commander of the GNFS, Divisional Officer Grade One (DO1) Mr Abraham Nii Dodoo, disclosed this to the Daily Graphic in Wa.

He attributed some of the fires to the use of sub-standard electrical cables and sockets, shoddy wiring, worn-out wires, the lack of fire wardens in schools, among others.

He said January was the peak of the dry season in the region, for which reason the service was embarking on some measures to prevent further fire outbreaks.

He said the measures included training fire wardens and educational campaigns in the area.

DO1 Dodoo said a fire safety risk assessment carried out in second-cycle institutions by the GNFS showed that none of the schools was implementing fire precautionary measures.

He, therefore, urged school authorities to step up their efforts by taking preventive measures to forestall fires in their respective schools.

He also urged them to conduct regular inspection of dormitories to ensure that students were not illegally using electrical gadgets, since the use of faulty gadgets could spark fires in the dormitories.

He suggested that if need be, a special area could be designated for use by students, where they would be supervised by trained fire wardens.

According to the commander, so far, 50 security men had been trained as fire wardens at the Kejetia Market Square in Wa by personnel of the GNFS and a fire post established at the centre due to the high volume of vehicular and human activities in the area.

He said the GNFS was also conducting fire safety risk assessment at some vantage points, including the Light Industrial Area, the central business district, the Regional Referral Hospital and the Wa Airport.

DO1 Dodoo advised the public to be careful in their use of electrical gadgets and fire, especially in the prevailing harmattan weather, since any carelessness by individuals or group could lead to devastating outcomes.

“For market women, I advise that after cooking they should make sure that all fires are put off before locking up their stores. They must also not throw away hot ashes recklessly,” he further cautioned.

He said his outfit had now established fire stations in all districts in the region, except Wa West and Daffiama-Bussie-Issa, to help contain any fire outbreaks in those areas.