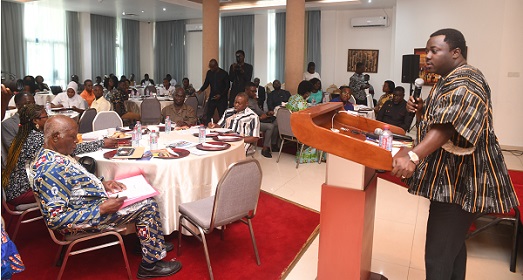 John Ntim Fordjour, a Deputy Minister of Education, speaking at the event in Accra
30.5k Shares

The event was organised by Worldreader, in collaboration with World Vision, UNESCO and the Complementary Education Agency (CEA).

A Deputy Minister of Education, John Ntim Fordjour, said the government was working towards ensuring that life-long learning opportunities were provided for all children in the country.

“Of what UNESCO considers a human right, everyone must have the opportunity to access literacy,” he said, adding that about 20 per cent of the country’s population 15 years and above were illiterate.

According to UNESCO, even though some 125 million children access four years of primary education around the globe, they were unable to have functional literacy, the minister said.

Use of local dialect

A retired doctor and author, Prof. Ladé Wosornu, urged school authorities to include the local dialect as a means of instruction, especially at the pre- and basic school levels.

“The international community has long recognised that language issues are central to the organisation and delivery of education of all kinds,” the author said.

The Country Director of World Vision, Dickens Thunde, also said the English language had taken a high-status position in Africa, such that in many countries education was delivered in a language children did not understand.

He said although children were exposed to the English language on their first day in school, “the reality is that the children do not understand the teacher until several years into their education”.

The Executive Director of the CEA, Francis Asumadu, said children from disadvantaged backgrounds, most of whom were found in public schools, tended to have learning deficits arising out of issues such as late enrolment and poor preparation at the early childhood level.

“A child who enters grade one at age eight or nine has already missed years through which the brain should be calibrating and repositioning for learning.

“This child would have to struggle through school to catch up with the system. Most of these children are not able to meet the demands of drawing from missed years of learning and new information,” he said.

In a related development, a non-governmental organisation in education, Engage Now Africa, also organised an event in Accra to commemorate the day.

In attendance were the Chief Executive of the Accra Metropolitan Assembly (AMA), Elizabeth Kwatsoe Sackey; representatives from the Ministry of Education and the Ga Traditional Council.

The Country Director of Engage Now Africa, Cecilia Amankwah, said the issue of literacy remained a “red hot bottom switch” that needed special attention, since the development of every nation hinged on education.

“Development runs on the wheels of literate citizens. The multiplying effects of literacy on the individual, the nation and the world are incalculable and the value-addition that education bears on nation’s development cannot be under-emphasised,” she said.

In a speech read on his behalf, the Ga Mantse, Nii Tackie Teiko Tsuru II, said: “On this occasion, I reaffirm my commitment to education and job creation for the people of Ga-Dangme.”